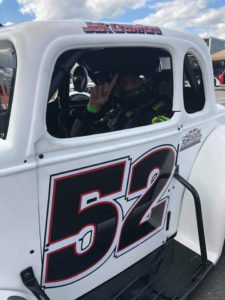 Making the trek to Inverness, Florida for the United States Legends Car INEX (USLIC) WinterNationals, Texan Jak Crawford once again proved is prowess behind the wheel. After running the tables and going four-for-four in road course wins in January, the young 13-year-old driver would be tested against the best oval drivers in Legends Car racing in the USLCI WinterNationals event.

“The last time I ran a race on an oval was in February and July of 2018, so I really wasn’t expecting to be as fast as I was right away,” explained Crawford. “The car was setup perfect from when we unloaded and I was able to post record times early in the event schedule.”

Race one on Monday saw Jak qualify on the pole position and hold course over the first half of the race. Giving up the point partway through the event, with about nine laps to go, Crawford fought back alongside the leader and showed his superior race craft over the final two circuits. Managing to get underneath his main college-aged rival and holding him on the high side, Jak pulled away for a spectacular win as he outshone his opponent while under pressure for the win.

Race two saw the young talent once again start from inside the front row on the pole position. However, the third place car got into the back of the Mark Nahrstedt Race Cars driver, causing him to spin as he was collected by a pair of other cars and did not complete a lap as a result of the damage.

The third and fourth races of the weekend were both raced on Wednesday, and Jak would qualify second and third respectively in the morning qualifying session. The negative impact from the crash in race two seemed to have caused some speed deterioration as his car was lacking the same speed from a day or two earlier. For race three, Jak finished second as he did not have enough speed to challenge for the win. In race four, Jak was once again the second best car on track and was taken out by an overanxious driver in a late race green-white-checkered double-file restart.

The final day of competition was fielded on Friday as Jak once again could only muster a second place starting spot on the grid. Lacking the same speed as the day prior, Jak once again finished second in race five and in doing so, secured the Vice Championship. 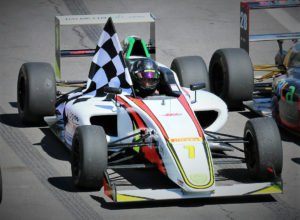 “I know that I raced really well in my first Pro oval event and sometimes you just get beat with equipment,” explained Crawford. “I think that I outraced my main competitor but I just couldn’t get the car to bite off turn four in the full sunshine. Maybe it had something to do with the crash on Wednesday or not, but I gave it my all. All I know is that on Monday when our cars were more equal, our team won.”

After a month of racing in the Pro Division, Crawford has quickly emerged as the best-of-the-best in Legends Car competition in North America. Keeping in mind that Crawford, still only 13, has raced in Legend Car action only since mid 2017, and in a limited capacity in his first year as a Young Lion and onwards into 2018.

What seemed to set Crawford apart from his older rivals this last week was not only his Mark Nahrstedt prepared race cars, but also Jak’s superior car control, his exceptional race craft learned from the age of six in high level racing environments, and his calm demeanor and composure under pressure. The label of “wheel-man” is starting to be heard a lot in reference to Crawford especially since he can “wheel” so many different types of racing machines.

Jak will continue to compete sparsely in Legends Car events throughout 2019 that do not conflict with his formula car calendar.

Jak Crawford would like to thank Mark Nahrstedt Race Cars, OMP Racing Gear, and Bell Helmets for their help and support this weekend and onwards into the future. For more information on Jak Crawford please follow him on Facebook: @jetpakjakcrawford and on Instagram: jakcrawford52. Jak’s marketing website is jetpakjak.com.