For the second year in a row, Jak Crawford has travelled to the South Garda Karting facility in Lonato, Italy to prepare for the Vortex ROK Cup International Final where there are more cadet level race entries every year than anywhere in the world. This year, the warmup race chosen for Jak was the Trofeo Autunno Finale where over 540 racers participated over a two-week period. For the final week of action, just in the Vortex Mini ROK class, there were over 75 racers, most of them hailing from the home country of Italy.

For the 2015 Mini ROK warm-up event, Jak joined the official Energy Corse Team with no real expectations. It was a learning process with the main lessons dished up by Simone Sorio, the legendary Italian coach and mechanic who helped Jak for the two weeks of racing at South Garda Karting.

Italian racing was a slightly different style or strategy of racing than Jak was used to in the United States. At the end of that warmup weekend in 2015, Jak had learned enough to finish tenth, but it could have been higher if not for a crash in one of the heats which created a poor starting position in the weekend’s main event. A year later, and it appears that Jak has graduated and adapted well to the Italian racing style.

“Jak is stronger this year so the constant battles for position in every corner, don’t impact him as much this year,” explained Simone Sorio, Jak’s coach and mechanic in Italy.

Leading up to the actual racing action at the Fall Trophy Final last week, there were two days of testing, as well as Jak acclimating to the big changes that were made to the South Garda Karting circuit over the last year. There were no big expectations for the Fall Trophy race other than gain some seat time and prepare for one of the biggest races on Jak Crawford’s calendar. 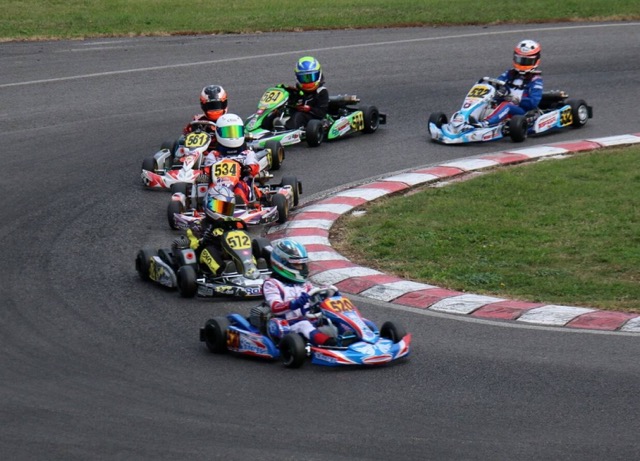 Transitioning to qualifying, the efforts for the cadet class were split into two groups. The weather conditions for Jak’s second qualifying group changed and Jak was only able to manage a sixth place starting position with the two heat races combining to make the final grid. The first heat race did not start well and Crawford could only battle to finish sixth. In the second heat, the American jumped to the lead early and maintained his position to take the win. The results from both heats would award Jak an outside row two starting positon for the final race.

As the final race began, the Texan driver was unable to get a good start but managed to gather himself in the opening laps. By halfway through the ten-lap event he was able to move forward and pass six karts to take the lead. He would never relinquish the lead but would be stalked by the others behind him as he had no slipstream, or draft, in order to turn the best lap times on the very fast course. In the end Jak was able to hold off the challengers and continue to learn the South Garda track.

There is still more work to do before the Vortex ROK International Final race in less than two weeks and Jak looks forward to the next challenge on Italian soil.

Jak also would like to thank OMP, Palmetto MDR, Speedsportz Racing Park and the Alan Rudolph Racing Academy both of which will open in North Houston before the end of 2016. Jak looks forwards to announcing his new 2017 sponsors very soon.

For more information on Jetpak Jak, or for sponsorship or calendar inquiries, please contact Nikki Crawford at nikocraw@gmail.com. Also, be sure to like Jetpak Jak Crawford on his Facebook page at www.facebook.com/jetpakjakcrawford.