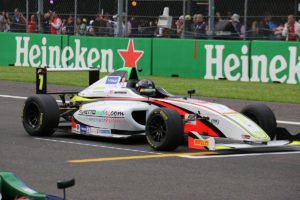 Jak Crawford is winding up his full-time kart racing career this week with an attempt to repeat as X30 Junior Champion at the 2018 Superkarts! USA (SKUSA) SuperNationals. After devoting the last five years to national and international karting competition primarily with Nash Motorsportz and Energy Corse, it is time to pursue other forms of racing full-time. Karting will still play a role in Jak’s racing development, but not on a full-time basis.

It is no secret that for 2018, Jak’s second junior campaign as a 12 and 13-year-old, the results have not been as stellar as all would have hoped. Energy Corse was able to work around his body size, now 5’10” and overweight in the scale line week-in-and-week-out, in order to achieve a top-seven result in a CIK-FIA European Championship event in Sarno, Italy, but the same cannot be said for his new team since that time, except for a second-place finish at a DKM rain race in Ampfing, Germany.

“I have not been on Evinco tires all year but due to my size I have had a very specific chassis problem once I moved away from the Energy equipment. If you look at the timing and scoring at most events I am very fast early in the week and then later in the week our struggles begin to appear with the chassis,” explains Crawford. “Who knows? But we are hopeful that the Evinco tire compound will be better for us in Las Vegas as I try and repeat my victory from last year.”

Looking realistically at the front of the karting grids in Europe where the pilots are becoming smaller and smaller every year in both OKJ and OK has prompted Crawford’s decision to begin his move out of karting. Jak feels he could run at the front in Senior categories but since he has already been racing in cars he would rather spend his full-time refining his car race craft.

Five years of national and international karting creates a long list of people to thank. Nash Motorsportz has been the constant throughout all of it and because Nash was a West Coast team and Jak, the Texan, lives in the middle of the country, he was able to be “on loan” to a lot of great teams and people on the East Coast including Timmy Lobaugh, Koene USA with Richard Hergink, Rollison Performance Group, Charlie Swayne Tiffin Willereth, and several others.

Internationally, a lot of thanks must go to Mick Panigada at Energy Corse. At ten years old and his first time racing in Europe, Jak ran in the ROK Cup International Final event with over 160 other mini-karts and finished second surrounded on the podium by two 13-year-old drivers. The level of mini-karting in 2015 was at its talent peak because the CIK-FIA age had not yet dropped in junior karting so drivers stayed in mini-karts longer. A year later Jak won the warmup weekend race and placed on the big ROK podium again. Panigada took Jak in and made a home for him in Italy early in 2018 so Jak and his family are grateful for the opportunities Mick provided.

Not enough can be said about Seth Nash and Chris Freckleton. In Jak’s first racing series with them, he won all six of the races and the rest is history. Nash is the best kept secret in any paddock. Seth is smart, caring, unassuming, and hardly ever goes backward with his engineering choices. He is a true class act. Freckleton is the best engine guy in the United States and has become a true professional. As a mechanic “Freck” was teaching Jak many things in karting that an eight-year shouldn’t know until much older. Chris Hatfield has been Jak’s longtime mechanic through Nash and is flawless week in and week out.

Jak has dabbled in Legends car racing the last year and a half with some big-time wins and championships in a very limited, part-time capacity. The Legends car focus will remain through summer 2019 but Jak is leaping up two levels to the difficult “Pro” division. Jak has also committed to the FIA sanctioned NACAM F4 series which runs through late June 2019. In his first ever F4 weekend in Mexico City a few weeks ago, Jak showed exceptional speed and garnered a podium result. Once Jak turns 14 in May 2019 some other racing plans will be announced.

OMP Racing Gear has been Jak’s sponsor since he was eight years old. Bell Helmets was added a few years later. Their combined support has been constant and beneficial. Those relationships will survive the move from full-time karting.