Two months into learning the ins and outs of the Legends Car world, Texan driver Jak Crawford scored a signature win at a prestigious Bojangles Summer Shootout at Charlotte Motor Speedway. In a series with tough competition, Jak impressed all with abilities and determination which isn’t really surprising, considering his successes through the karting ranks.

Traveling from Texas every week and racing the entire month of June and July at Charlotte Motor Speedway, Jak has completed the 2017 ten-race INEX sanctioned Bojangles Summer Shootout (BOJSSO) US Legends Cars International series. For this annual event, the car counts in the Young Lions division, ages 12-15, are the best in the country and the racing is cut-throat.

Crawford rolled into Charlotte for the first event with only three Legends Car races the previous week as his proving ground. Not nearly enough time to transition from karting to the Legends cars, even for a wheel-man like Jak, Crawford took it all in stride as he gained experience with each passing event. 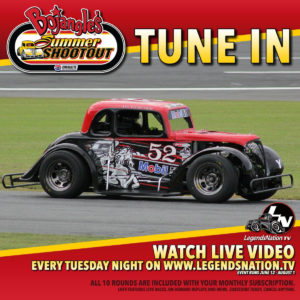 The differences between karting, where Jak is a multi-time karting champion, and Legends Car racing is grip level, power to weight ratio, driver confinement, oval track configuration, constant car contact and more. Kart racing has the luxury of a lot of track time for practice but Legends Car racing has very little, so it is hard to learn the skills quickly and gain the lap experience needed to succeed.

“From starting junior karting earlier this year, I learned how to brake deep so that isn’t the challenge,” explained Crawford. “The hardest thing for me has been to get used to sliding mid-corner and on exit due to the motor power and low grip tires. Also, there are a lot of other things that are new to me.”

At the beginning of the BOJSSO, Jak lacked the speed to be in the lead pack, but excelled at mid-pack racing, even winning multiple heats with little trouble. It became clear that his problem was not racing an event, but qualifying for one.

“Speed is good, but Jak is a racer. Racers find their way to the front during races. The speed will come soon for Jak and his luck will improve,” stated Chase Pistone, the team principal for Chase Pistone, Inc which fields both Legends Cars and Late Model Stock Cars.

Top five results at the 2017 BOJSSO were achievable for Jak as he progressed through the series, but three weeks of engine problems including an oil pump, a bad cylinder and a weak backup motor piled on to also being crashed out of the lead packs on two other occasions.

In race conditions, Jak had a top five car for all of July but was never able to show it until the next to last race of the series. His talent progression and the good luck returned at the right time. The week he won, he led every lap.

As the youngest drive in the field and a Legends Car rookie, Jak was able to achieve a seventh place finish in the championship standings out of 32 total drivers, many of whom already are late model car racers.

Jak will continue Legends racing late into 2017 competing at a National event in Las Vegas, as well as a Road Course National event in Atlanta. As far as karting, Jak will compete at the New Castle Motorsports Park facility in Spiceland, Indiana next week at the annual SuperKarts! USA (SKUSA) SummerNationals event where he is second in championship points, and later in the year in Portimao, Portugal as a member of Team USA Rotax Max Challenge Grand Finals.

Jak would like to thank OMP racing gear for their support in both karts and car racing. It’s not easy for OMP to keep up with a rapidly growing boy. Bell Helmet USA is a supplier for car racing and Jak would like to extend his thanks to them for becoming such a great partner. A big thanks to Mobil 1, who is a car racing marketing partner as well. More thanks to Chase Pistone, Inc. and their entire crew who work tirelessly to provide the best equipment possible.