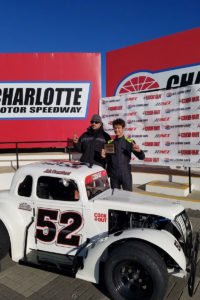 Returning to North Carolina for another weekend of US Legend Cars competition, Texan Jack Crawford was back on top, claiming a pair of victories over the weekend. Taking place at the Charlotte Motor Speedway on a slightly shorter circuit than last event, the two-discipline athlete, both legends cars and formula cars, dominated the two-day event with one pole position and two victories.

The first day of action would see rain clouds move into the area providing for a slick surface and increased chances of mistakes. Taking it all in stride and adapting as any good driver should, Crawford qualified in the second position but started outside row two in the fourth position due to the invert. Carefully maneuvering his way through the first half of the race, Crawford went on the offensive as the race wore on, taking the lead on the final circuit and driving off to the checkered flag.

The second race on the weekend was in much nicer weather and Jak quickly showed his abilities to all who were in attendance. After claiming the pole position and forced to start in the sixth spot due to a top-six invert of position, the young talent drove through the field with ease, taking the point just past the halfway mark and never looked back.

“The pass for the lead must have been one of the top-five passes of my life,” explained an excited Crawford after the race. “Turn one is a high speed downhill right hander and I knew I had to take advantage of my speed. I ran a tighter line than the leader and was able to use that line to stay on the power and drive past him. It was one of those passes that you never forget.”

With four victories on two very different race courses over the past two weekend, Crawford has turned the heads and piqued the interest of legend car experts and circle track teams and drivers across the country. Scoring professional level wins in his first two events, Crawford is quickly showing his diversity in both oval and road course racing as well as in legend car and formula car competition.

Enjoying the upcoming weekend back home in Texas, the rest won’t last long before Crawford is back behind the wheel. With circle track testing on the schedule, the multi-time karting champion will prepare for the important Winter Nationals in Inverness, Florida in mid February. Winning four of five races and the Young Lions Championship at the event last year, Crawford is determined to shock the legend car community in the professional ranks, much as he has done on the road courses in 2019 to date.

Following oval testing, Crawford will once again be back with his formula car coach Darren Manning to continue his preparation towards another adventure in 2019, on top of NACAM F4 program south of the border in Mexico where rounds three, four and five will take place in Puebla, Mexico.

Jak Crawford would like to thank Mark Nahrstedt Race Cars, OMP Racing Gear, and Bell Helmets for their help and support this weekend and onwards into the future.