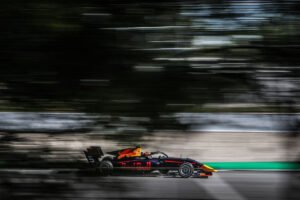 It was announced yesterday from in England that Jak Crawford’s second year with the Red Bull Junior Team is under way with an assignment to the FIA F3 program. Set to compete with Hitech GP, Crawford will continue to sport the Red Bull branding as he climbs the ladder to the upper echelons of motorsports. After a successful first year racing cars in Europe, the Red Bull program has given Jak a big-league promotion to FIA F3, where every race will be part of a Formula One race weekend, including an event in October at the famed Circuit of the Americas in Austin, Texas, Jak’s home county, home state, and just a couple hour drive from his residence.

Not only is the schedule an exciting prospect for Crawford, but also so is the big step up in a much faster car as well. For those in the United States to fully understand the gravity of the promotion, it I would be akin to a promotion on the Road to Indy from a USF2000 USF-17 to an Indy Lights machine. The FIA F3 car and the Indy Lights car have very similar size and weight ratio, as well as horsepower and speed. The FIA F3 car is a high downforce car that also utilizes the Drag Reduction System (DRS).

Hopefully, there will be minimal COVID-19 impacts to the long-term portion of the 2021 season, at least less than 2020 where Jak had to spend over ten months in a row away from his Texas home. Instead of living outside of Amsterdam, Netherlands, this time in 2021, Jak will make his home away from home in Oxford, England, not too far from Silverstone where Hitech GP is based, and the Red Bull Racing Headquarters in Milton Keynes, both locations where Jak will spend significant time in 2021.

Pre-season testing for FIA F3 is set to begin late in February with the young American reporting to duty in England by mid-February, but already the preliminary COVID-19 information coming back is that Jak may not arrive in Europe, or England, until March. To end the FIA F3 season in 2020, Jak tested with Hitech GP and was in the top five in qualifying speed and was the top time driver from the race run segment of the test.

“I am very happy about the promotion to FIA F3 where my testing was strong to end 2020. I want to thank Red Bull and Helmet Marko, as well as Oliver Oakes and Hitech GP for their trust in what we can accomplish together in 2021,” explained Crawford. “I really enjoy the new car and look forward to the race weekends beginning in May, just a few days after my sixteenth birthday. This promotion puts me a little closer to my mutual goals with Red Bull.” 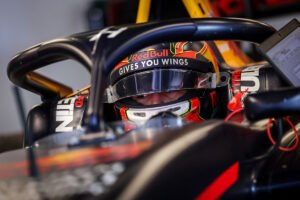 Besides Red Bull and Jak’s family sponsors, Jak has a new large corporate personal partnership that will be announced in the very near future, while additional partnerships and other event sponsorship for racing at the United States Grand Prix weekend in Austin, Texas are still in the works.

The Red Bull Junior Team is the talent generator for the four Formula One seats controlled by Red Bull Racing and overseen by Helmut Marko. Jak is one of only a handful of Red Bull Junior drivers from around the world, and the only American aligned with any Formula One team.

Hitech GP is a premier junior formula racing team based in Silverstone, England run by a former Red Bull junior, Oliver Oakes. Hitech GP successfully fields cars in many series including F2, FIA F3, as well as two regional F3 series, and British F4, in addition to other racing endeavors.