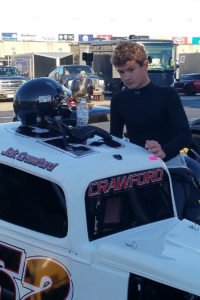 Texan Jak Crawford travelled to Charlotte, North Carolina this past weekend for his first time piloting a Legends Car since his United States Legends Car – INEX (USLCI) Bojangles Summer Shootout win in July 2018. The ten race USLCI Cook Out Winter Heat series was hosting rounds four and five of its annual program that draws racers from all over the country to the famed Charlotte Motor Speedway.

Competing in the Young Lions division in 2018, it was another upwards progression in classes for Crawford as he jumped up two divisions from the starter Young Lions class to the top Pro Division that features the best drivers in the USLCI series. The move to the Pros was a big jump up for the young 13-year-old that was advised against by many within the Legend Car industry.

Mark Nahrstedt Race Cars has only provided cars for Jak for two events including a winning rental car for the Summer Shootout event in July 2018, and the event this past weekend. Mark did not intend to disappoint with a new #52 hot rod awaiting Jak up his arrival to North Carolina.

With one three-hour practice session on Friday, Crawford used the session to relearn the car and get acquainted with the challenging “roval” track layout. By the end of the day, it was clear he was going to be a threat for the victory over the course of the two-race weekend.

For Saturday’s practice, qualifying, and heat race, the track was dry, but the air was chilly with temperatures just barely reaching 40 degrees and snow flurries on occasion. Crawford continued from where he left off Friday and dominated all official on track sessions. Claiming the quickest lap in qualifying by over half a second, the Texan held off his early pursuers to win the heat race comfortably. The feature that day was postponed until Sunday due to time constraints.

On Sunday the track conditions would prove to be very challenging. With rain overnight, the roval was waterlogged and very slick for the Pro division drivers. A light drizzle lasted most of the day and Jak was forced to relearn the track in the one and only practice session that would precede Saturday’s scheduled main event.

The first race rolled out on a wet track with the double file start allowing Jak’s competition to hold him close over the first half of the race. Crawford and three fellow competitors swapped the lead over-and-over again in tight side-by-side racing. It was apparent Jak was the fastest and in the end, he would pull away over the last few laps and win by nearly two seconds, his first Pro Division victory. 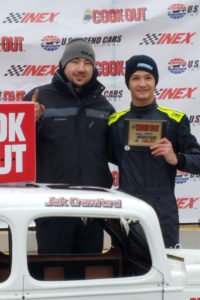 Qualifying for the second race would go well for Crawford and the changes Mark Nahrstedt made to the car allowed Jak a 1.2 second advantage and another Pro Division pole position, his second in as many days. In an effort to save time on the series behalf, the second heat race was removed from the schedule and all drivers started the main event from their qualifying positions. The second race was very similar to the first for Jak. The double file start allowed for close competition and a lot of two-car wheel-to-wheel drama for the first half of the event before Crawford took control in the final two laps and drove off to his second checkered flag of the weekend.

Jak will find himself back in Charlotte the next two weekends for the remainder of the Winter Heat Series and hopes to top the podium blocks as he begins to march up the motorsports ladder in multiple disciplines of motorsports.

Jak Crawford would like to thank Mark Nahrstedt Race Cars, OMP Racing Gear, and Bell Helmets for their help and support this weekend and onwards into the future.