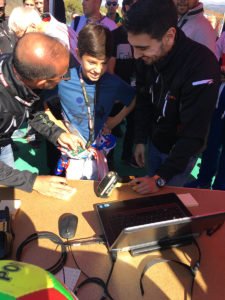 As one of the premier karting operations in North America, Speed Concepts Racing continues to add talent to their driver lineup. Inking a deal with a rookie junior pilot, Jack Jeffers will join the Florida based program effective immediately with his first event less than one month away. A fast and consistent driver, Jeffers will immediately have an impact on the Speed Concepts Racing Junior program.

“We are welcoming Jack and his family to our program with open arms,” explained Mike Speed. “He has shown great speed throughout 2019 as he finished on the championship podium at this year’s Florida Winter Tour in Mini ROK. Making the move to the junior ranks, Jeffers will benefit from our large junior team, shared data and knowledge as well as our driver coaching and development program.”

Jeffers joins the Florida based team with national and international experience. In 2017, after finishing second at the US Open event in New York, Jeffers was awarded a ticket to join Team USA and compete at the Rotax Grand Finals in Portugal. The following year, Jeffers earned his way to Team USA yet again, this time in the Vortex Mini ROK category and competed for his country at the ROK International Final in Italy. 2019 has brought more success for the now rookie junior driver as he finished on the championship podium at the 2019 Florida Winter Tour in Mini ROK. Additionally, Jeffers has already earned the right to race for Team USA again in 2019, this year in August in Le Mans, France.

“I am excited to have the opportunity to work with Jack,” explained Alex Speed. “Being able to work with a driver that is new to junior racing provides a clean slate. Though Jack has done a few junior events to date, it is almost a clean slate to be able to develop him as a driver and a teammate both on and off the track.”

Moving to Junior at the ROK Fest Biloxi Battle at the Beach event in May, Jeffers instantly made an impression. Running as high as third and showing great consistency, an unfortunate incident in the main event relegated him to the tail of the field and ruined any chances of a good finish.

“Speed Concepts Racing is one of only a couple of teams that we would ever consider a move to,” added Doug Jeffers, father of Jack. “I had spoken to Mike in the past and when an opportunity became available and a spot opened up on the team, we jumped at the opportunity. Their results and success speak for themselves, and we as a family are much looking forward to our upcoming events.”