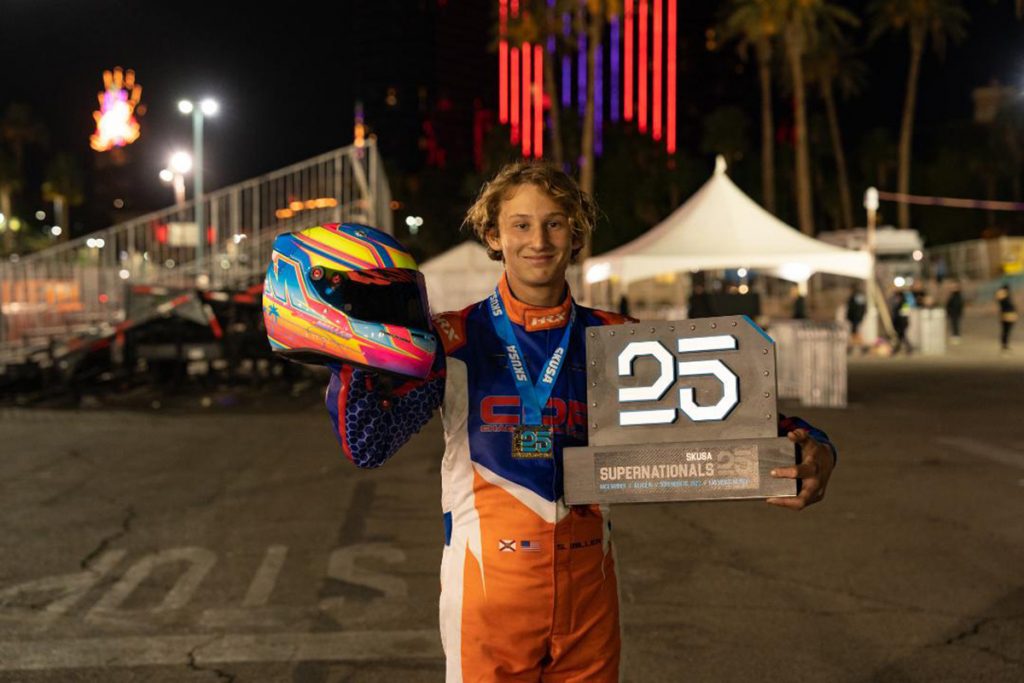 Back in Las Vegas after earning a second-place podium finish in ROK Junior at the ROK Vegas 2022 ROK Cup USA program earlier this month, Steven Miller descended into Las Vegas to compete at the Superkarts! USA (SKUSA) SuperNationals 25 event. Taking place on the temporary circuit adjacent to the RIO All-Suites Hotel & Casino, Miller managed to reign supreme on Super Sunday in a spirited drive to the front to win the KA100 Junior class. Even though the competition was tough competing against the top junior drivers, Miller left Las Vegas crowned as a SuperNationals 25 Champion. 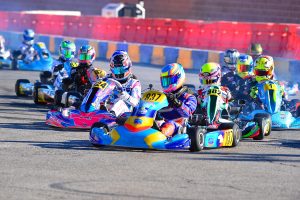 “What a feeling to win the biggest kart race in the world,” explained Miller. “The race went as planned. I was managing my tires from the beginning so I could save them for aggressive attacks towards the final laps. It is a huge win for not only me, but for Chad Dokken Racing, and my sponsors PMI and Sun Print Racing as well.”

In a flawless qualifying session on Thursday morning, Miller found himself at the top of the charts scoring the fastest lap and pole position in a KA100 Junior field that featured sixty-seven drivers. Finishing fourth, second and fifth in his three heat races, the Chad Dokken Racing driver found himself on the inside of row three for Super Sunday’s main event and a shot at the win.

Aggressive on the start and defending when needed, Miller quickly moved his way to the front of the field and took control of the main event. Maintaining his pace out front and holding off the advances from behind, and being the only driver from the top-five finishers to not receive an incident responsibility or pushback bumper penalty, Miller drove to his first career SKUSA SuperNationals 25 victory showcasing a seemingly impossible three wide crossover maneuver in a blocking train without getting stuck on the outside.

Miller continued, “There are two sessions we wanted to be at the front of the field in and that was qualifying and the main event, and we were successful. A SuperNats 25 pole position and win is something that me and the team have been working hard for and now is a reality.”

With the December SSKC Rounds 5 & 6 being the final races of the 2022 season for Miller as he leads in the points in KA100 Junior, he has his focus set on another Championship win to cap off 2022.

For more information on Steven Miller, please contact RTD Media & Management at 317.270.8723 or via email to Mike@RTD-Media.com or visit www.StevenMillerRacing.com.