HMD MOTORSPORTS PUTS IOWA BEHIND THEM AND FOCUSES FORWARD TO NASHVILLE 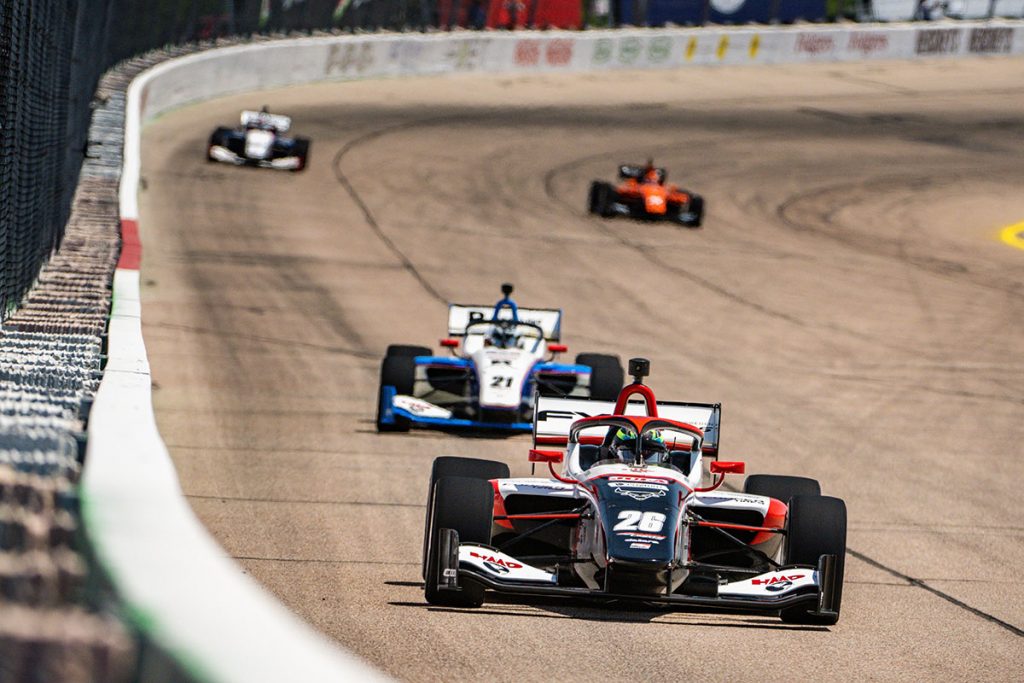 While the NTT INDYCAR SERIES team of Dale Coyne Racing with HDM Motorsports flourished with rookie driver David Malukas, HMD Motorsport’s Indy Lights Presented by Cooper Tires team struggled this past weekend at Iowa Speedway. In a rare event, after leading the Driver Championship with Linus Lundqvist and claiming five wins and ten podiums so far this season, HMD Motorsports walked away from Iowa Speedway without placing a driver on the podium,

Iowa Speedway was added back to the Indy Lights schedule this season after a three-year hiatus, making the track not only new to the current Indy Lights drivers, but also to HMD Motorsports as a team and with only one practice session on the schedule for the weekend, drivers were expected to quickly acclimate to the track. While Lundqvist topped the charts in practice, the remaining HMD drivers finished in the back half of the field.

When qualifying came around on Saturday morning, HMD Motorsports showed improvement through their lineup with Lundqvist qualifying on the front row, Danial Frost on the second and Christian Bogle earning his best qualifying position of seventh. After determining that Benjamin Pedersen’s engine was down on power – and without enough time for an engine change – Pedersen qualified in ninth. In his first weekend with HMD Motorsports and his first ever oval, Kyffin Simpson qualified eleventh just ahead of his HMD teammate Antonio Serravalle.

In the race, HMD Motorsports faced multiple highs and lows throughout their six-car lineup. After starting from second, Linus Lundqvist put up a strong fight, eventually passing polesitter Hunter McElrea for the lead with twenty-six laps remaining. After leading the remainder of the race and being the first to cross the finish line, Lundqvist was handed a three-position post-race penalty for avoidable contact on the final lap, moving him to fourth in the official results. Frost, Pedersen, Bogle and Simpson all finished on the lead-lap of the 0.875-mile track in seventh, ninth, tenth and eleventh respectively. Antonio Serravalle finished two laps down in twelfth.

While the Indy Lights weekend did not go as planned, David Malukas in the NTT INDYCAR SERIES with Dale Coyne Racing with HMD Motorsports continued to impress after qualifying sixth and fourteenth for the double-header weekend. In the first race of the weekend on Saturday, Malukas and the team struggled to get the setup and strategy to work together, ultimately finishing in fourteenth. On Sunday however, after falling to sixteenth after a pit stop cycle, Malukas carved his way back to the front, setting up impressive passes over veteran drivers and series standouts. In the final five laps, Malukas made up three positions to finish in eighth – his best finish yet in the NTT INDYCAR SERIES. After a strong weekend, Malukas also closed the points gap in the Rookie Championship to only four points behind the current leader, Christian Lundgaard.

HMD Motorsports will next be on track this weekend with the NTT INDYCAR SERIES at Indianapolis Motor Speedway this weekend, July 29-30, for the Gallagher Grand Prix. With one weekend off, the Indy Lights Championship will return to competition in two weeks alongside INDYCAR for the Music City Grand Prix in the Streets of Nashville.