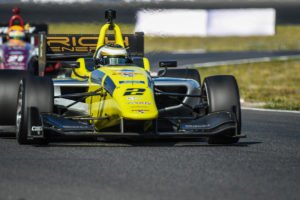 Just one week after HMD Motorsports driver David Malukas scored a third place finish at World Wide Technology Raceway at Gateway, the team headed to the West Coast where Toby Sowery worked his way to the top step of the podium at the famed Portland International Raceway. With two drivers competing in the Indy Lights Presented by Cooper Tires Championship this past weekend, HMD Motorsports had to work quickly in order to turn the cars around and prepare for the switch between an oval and road course setup.

Qualifying fifth with David Malukas and sixth with Toby Sowery for race one of the weekend, both drivers ran stable races. Coming up on the halfway point on lap twelve, Malukas had a sight misstep going off track, but he was quickly able to reenter the track remaining on the lead lap, and ultimately claimed a sixth place result. Sowery ran a strong race working his way through the field into the fourth position. Trailing closely behind series competitor Robert Megennis during the latter stages of the race, Sowery just missed the podium by a scant 0.1098 seconds but redeemed himself on Sunday.

Ready to take on the final race of the weekend, Sowery and Malukas qualified third and fourth respectively for race two that took place Sunday morning, just before the penultimate round of the NTT IndyCar Series. At the start, the 17-year-old was involved in an unfortunate and unavoidable incident during the first turn of lap one as Malukas made contact due to a mistake from a fellow competitor, ultimately forcing him to retire from the race with damage. 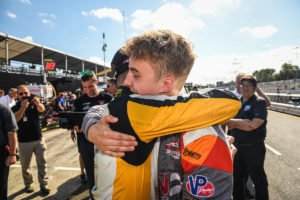 “After coming off of a strong weekend at Gateway, I was really hoping that my season was starting to take a turn for the better, and I was looking for another strong result,” Malukas stated. “While it was not the weekend we wanted, we were able to learn a lot, and I think we showed pace and that we can run at the front. There are still two races left in the season, so I am really focusing on finishing the year out strong.”

During the same incident that removed teammate David Malukas from the race, Toby Sowery was able to get a strong start and jump into the second position before the yellow flag came out. Restarting on lap four, Sowery had an impressively quick restart, and was able to make a move on the inside taking over the lead position. Holding off Rinus VeeKay for the remainder of the race, Sowery was able to clinch his first career victory in the Road to Indy and the first for HMD Motorsports since their restructure.

“Absolutely over the moon with the result!” Sowery exclaimed. “A huge thank you to the team for all of the hard work they put in. I couldn’t have done it without them, and they deserve this victory!”

Still adjusting to recent team changes and a complete rebranding, HMD Motorsports would like to clarify a few details. The team, formerly known as BN Racing, now competes under the name HMD Motorsports. Welcoming John Cummiskey and Geoff Fickling to the operation, HMD Motorsports has found a new home at John Cummiskey Racing in Brownsburg, Indiana. John is operating in the role of Team Manager while Fickling is overseeing the Engineering side of the program. 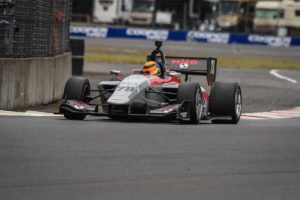 As the 2019 season winds down, HMD Motorsports is looking for drivers to participate in the upcoming Chris Griffis Memorial Test. With cars available for the Cooper Tires USF2000 Championship and Indy Pro 2000 Championship Presented by Cooper Tires, four to six seats are available for the upcoming test. The annual Chris Griffis Memorial Test will take place October 19-20 at Indianapolis Motor Speedway on the road course.