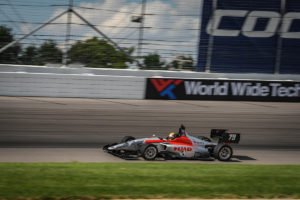 After a rather successful weekend at World Wide Technology (WWT) Raceway at Gateway this past weekend, HMD Motorsports is now headed to the West Coast for their next event at the Portland International Raceway during this Labor Day weekend. With such a short amount of time between rounds, the HMD Motorsports team quickly regrouped in order to prepare for rounds 15 and 16 of the 2019 Indy Lights Presented by Cooper Tires Championship season.

This past weekend, the pair of HMD Motorsports drivers, David Malukas and Toby Sowery, showed speed early on in the weekend. Malukas and Sowery qualified fourth and fifth respectively following their front of the field performances in practice earlier that day. Early on in the race, Malukas was able to jump up to the third position where he stayed for the remainder of the event, earning his second podium of his rookie season.

“I think the car was more set up for the end of race,” Malukas explained. “In the beginning I was struggling with some sliding and some oversteer issues, and I was just trying to keep up with them [Oliver Askew and Rinus Veekay]. Halfway through, the car just kind of kicked in, and I was able to move forward. A few more laps and I may have been able to finish second.”

During the first ten laps of the race, Toby Sowery, driver of the #2 entry, was racing side by side for the fifth position when he has an unfortunate spin on lap eleven, sending him to the back of the pack. After making a quick pit stop for a fresh set of tires, Sowery was able to get back out and finish the race on the lead lap.

“Gateway wasn’t how we were expecting the event to go,” Sowery stated. “We left practice feeling positive and comfortable with our car, but it didn’t click for us. I struggled massively with the car balance in the race and sadly it was enough to ruin the weekend. However, we have our next event in Portland this coming weekend, and I feel as a team we can turn the disappointment of Gateway into hunger and drive for a good result this weekend. We have a lot of fantastic new people within the team who are always helping and striving for improvements, and I hope we, as a team, end on a high in Portland and Laguna Seca.” 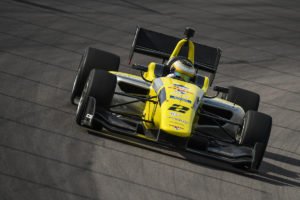 Now heading into the end of the season, HMD Motorsports is looking to finish out the season strong. After a series of changes within the team, Lead Engineer Geoff Fickling is hoping to use the remainder of the season to grow and mesh as a team and prepare to come back even stronger next season

“We have had a lot of personnel step into new roles, and we are still going through a growing period within the team and working out some kinks,” Fickling stated. “Both David and Toby have done a great job adjusting with all of the changes, and they have both proven that they are talented drivers who will only improve from here. My goal with the team for the remainder of the season is to work at becoming a strong unit, gaining valuable track time, collecting data and learning as a team in order to come back next year as a strong and successful team.”

HMD Motorsports is now ready to take on the 14-turn road course at Portland International Raceway. With only four races remaining in the season, Sowery and Malukas sit fifth and sixth in the points championship.

Heading back into a standard two race weekend, HMD Motorsports will hit the track Friday morning for practice followed by an early evening qualifying session. Saturday will contain a second qualifying session prior to Race 1 (round 15) at 1:50pm. The weekend will come to a close on Sunday morning following Race 2 (round 16).