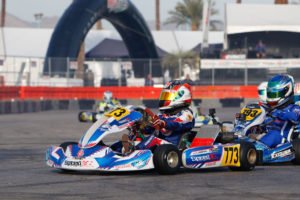 Competing at the unofficial final event of the 2018 karting season, Speed Concepts Racing travelled to Las Vegas for the second time in the past three weeks to take part in the Superkarts! USA (SKUSA) SuperNationals. Running on the temporary circuit in the parking lot adjacent to the RIO All-Suites Hotel and Casino, the Florida based squad scored heat race wins, pole positions and podium results in the biggest karting event in the world.

Three drivers entered the Junior ranks as Luca Mars, Justin Arseneau and Kyffin Simpson contested the X30 Junior category. Mars scored the best weekend results of the trio as he steered his Tony Kart chassis to a fourth place finish on Super Sunday en route to the fastest lap of the race. Mars improved throughout the weekend as a sixth place qualifying effort turned into an outside front row starting spot after the three heat race flight format. Canadian Arseneau rebounded from heat races that saw him line up 22nd for the main event after qualifying seventh as he drove forward into the top-ten and garnered a strong eighth place result.

Simpson, who has been in the seat periodically throughout the 2018 season, showed great pace in Las Vegas. After qualifying in the 23rd position, a strong set of heats allowed him to transfer directly to the main event and lined him up on the outside of row eight. Battling hard throughout the final, Simpson secured a 23rd place finish as all three Speed Concepts Racing drivers made and finished the main event.

Mars and Simpson would also see action in the KA100 Junior class. After qualifying 1 – 2 and taking a lock on the front row starting spots for the three heat races, the duo finished with top-ten finishes on Sunday. In a class that provided both great and close racing, Simpson scored his best SuperNationals finish in seventh while Mars added his second top-ten of the weekend in ninth.

“The Junior classes were some of the deepest and most talented fields I have seen on the grid in North American karting,” explained Speed Concepts Racing Owner Mike Speed. “To run at the front in these divisions takes a lot of talent, speed and preparation. Our drivers and our Tony Kart equipment were constantly there and we look forward to 2019 to continue our success.” 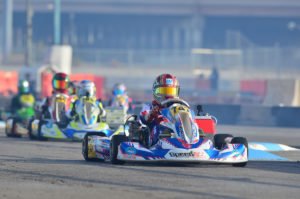 Alex Powell stood on the podium in the IAME Mini Swift class as he converted his seventh place starting position into a third place podium result. In a dramatic last lap that saw seven drivers battle for the win, Powell had a chance for the victory but came up just short in his race winning effort. Paul Bocuse and Noah Baker qualified 32nd and 23rd overall and progressed through the heat races directly to the main event and both drivers finished in the front half of the field coming home 20th and 21st. Wyatt Vidovich joined Speed Concepts Racing in Las Vegas and though he did not have the experience of the other drivers, he did show progression throughout the weekend. Not able to make the main event on Sunday, Vidovich was a great addition to the team and learned a lot in Las Vegas.

X30 Masters driver Scott Roberts was the lone entrant in the SCR program over the age of fifteen as he battled in the Masters ranks. Qualifying 20th overall and moving forward in the heats, including a fifth place finish in heat two, Roberts started 27th for the main event but would fail to finish.

Speed continued, “We have a little time off now before starting our winter test program. Preparing for the 2019 Florida Winter Tour, we have a lot to accomplish in the next month and want to ensure that we are 100% ready to go.”

Speed Concepts Racing has multiple one and two race old chassis available including Tony Kart cadet and full size as well as Kart Republic cadets. All karts are in great condition and can be picked up in Orlando or shipped at purchaser’s expense. Contact Speed Concepts Racing for more information.