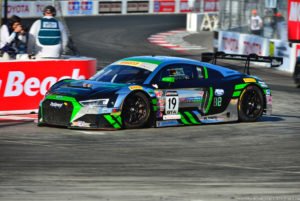 After a podium finish with Pirelli World Challenge SprintX co-driver Ryan Dalziel at the Circuit of the Americas in Austin, Texas, New Braunfels resident Parker Chase hit the streets of California for the Toyota Long Beach Grand Prix in an impressive debut this past weekend. Chase, driver of the #19 Vertical Bridge / New Braunfels Convention and Visitors Bureau / ProBalance Protein Water / Music Movement Audi R8 GT3 LMS, was able to capture another podium result for his TruSpeed AutoSport outfit all while gaining good points for the overall series championship.

Utilizing the first session to come to grips with the barrier-lined, temporary street circuit and with a few near misses due to the slick surface, TruSpeed Autosport and Audi Sport customer racing engineers went to work to make some changes to their Audi R8. With limited track time over the jam-packed weekend, the next session would not take place until Saturday morning as a short practice run would lead directly into the qualifying session, setting the grid for Sunday’s single race event.

After qualifying fourth, Chase drove like a seasoned veteran throughout the timed race event and was able to advance his position as he battled wheel-to-wheel with drivers who have years of experience both in PWC competition as well as at the Long Beach circuit. When the checkered flag flew, Chase was able to garner a third-place podium finish in class and finished an astounding seventh overall, leaving California with a car intact and no damage, a feat in itself on a temporary road course.

“It was a good first weekend for myself and the team in Long Beach. I feared a left rear puncture after making contact with the wall early in the race, but we escaped with no issues to come out of the weekend with another podium and with good points,” explained Parker Chase. “I can’t wait to get back into the car with Ryan (Dalziel) in two weeks at Virginia International Raceway, which should be the perfect track for us and our Audi R8.” 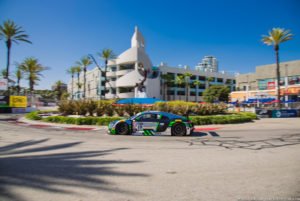 Chase continued, “I also want to thank all of my partners and supporters that were in attendance this weekend. A huge shout out to Vertical Bridge and Music Movement guests for their support trackside in Long Beach. Also, it was a pleasure to host one of my new partners, IronClad Performance Wear and their parent company, Brighton Best International. They are local to the Long Beach area and have been a supporter of the TruSpeed AutoSport program for quite some time. I look forward to representing them as a brand ambassador for the remainder of the 2018 season as we continue to provide value and trackside programs for every one of our marketing partners.”

Parker Chase will be at Virginia International Raceway April 26-29 for the second Pirelli World Challenge SprintX race weekend of the season. Competing with driver coach and sportscar standout Ryan Dalziel, the duo will be aiming for the race win after claiming three podiums already in 2018.