FROM LAST TO 12TH FOR JUAN MANUEL CORREA AT MONACO 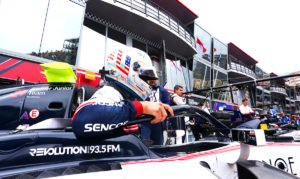 Taking on the 3.337-km Circuit de Monaco, the most prestigious race on the FIA Formula 2 calendar, American Juan Manuel Correa had a trying weekend. After showing great pace in the first wheel-to-wheel action of the weekend, a late race incident removed any chance of a good result, but in race two, the American drove from last on the grid to a 12th place result after his car did not launch properly when the track went hot.

“This weekend was my first driving in Monaco and the circuit is an absolute blast to drive so I really enjoyed that,” explained the Sauber Junior Team by Charouz driver. “But once again, we started the weekend behind as we had a very difficult qualifying session. I did not feel comfortable with the car and it seems that every time we put on the softer tires for qualifying, everyone is able to make the step forward and we are not. I am fighting too much with the car so we have to figure out what is happening with that for the future.”

Returning to the Circuit de Monaco on Friday, for the first wheel-to-wheel action of the weekend, Correa lined up 15th and had a spirited drive forward to the sixth position before a late race red flag and an incident only three laps from the end ruined his day.

“I made a big mistake in the race but obviously the red flag compromised our entire strategy as we had not completed our pit stop,” added Correa. “By the time the red flag came out, many people behind us on track had already finished their mandatory stop so we know we were fighting for P13 or P14 at best. I risked it too much trying to overcut another car and put it in the wall. Not much I can say, just very disappointing.”

With the second wheel-to-wheel action at the Circuit de Monaco coming on Saturday afternoon, Juan Manuel Correa marched forward to finish in the 12th position. Getting shuffled back to 20th and the last position at the start, Correa put on a clinic of passing skills as he quickly progressed forward passing eight cars around the tight quarters of the barrier lined street circuit. Taking chances but also working on calculated moves, the Sauber Junior Team by Charouz driver did not disappoint, gaining experience along the way.

Correa continued, “I was shuffled to dead last off the line, even my teammate got by. To come from dead last to P12 in Monaco, in my opinion, is a good race. I had a lot of fun and completed a lot of overtakes considering how the track is so it was definitely a big challenge. At the end of the day I had fun, and that is also why I am here and why we are all here. I cannot leave this weekend satisfied, but I leave with a good feeling moving forward and know that we 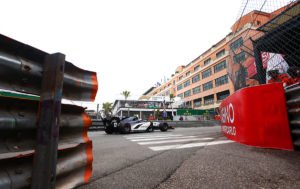 need to keep improving. The good thing is that we have a very good potential. We are not lost, we just need to put it all together and fix a few things, but we will get there and I am very confident.”

The next event of the FIA Formula 2 calendar is the Circuit Paul Ricard in France June 21st to the 23rd, as Juan Manuel Correa will look to get back to a point scoring position.