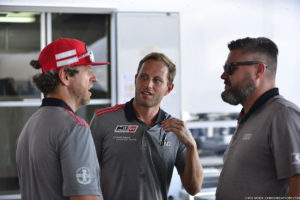 It was a four podium weekend for Audi Sport customer racing outfit M1 GT Racing during the final round of the Pirelli World Challenge SprintX program at the famed Circuit of the Americas in Austin, Texas. Under picture perfect weather, the grey and red Audi R8s were consistently at the front of their respective divisions throughout the weekend and ended the SprintX season on a high note as they look towards future racing programs.

“COTA is an amazing facility and all of our drivers performed well throughout the weekend,” explained Remi Lanteigne. “The complete team and drivers worked very well together and we were able to elevate the performance of the team as a whole. Can’t wait to get both cars back on track together again soon.”

Friday evening would see the round four make-up event from the Canadian Tire Motorsports Park where James Dayson and David Ostella would enter the GT Am/Am division. Racing at dusk, the duo managed to secure a second place result with some good, hard on track competition.

“The weekend was a huge success for us at COTA; we grabbed a P2 finish in the make-up race on Friday evening,” explained Ostella. “This provided a great start to the weekend and good baseline for us to really nail down our setup for the next two events on the weekend, and we were able to focus on making sure we took care of the tires for the duration of the race. The crew did a fantastic job as well as the other drivers to make sure we brought the car home with a couple in class podium finishes.”

Back to the track for the rest of the weekend, Ostella would step away from driving duties but remain on site to support his M1 GT Racing program. Walt Bowlin and Lars Viljoen would take the driving duties of the #24 M1 GT prepared Audi while James Dayson and Jason Bell would be at the controls of the #23. Vijooen would look good early in Saturday’s event before a drive through penalty due to contact on the opening lap relegated him down the running order. Showing great speed, Bowlin hopped behind the wheel just past the halfway point and drove the car to an eighth place result. Dayson and Bell would lead the team’s results on the day as the ultra-fast partnership was able to stay out of trouble and claim a third place podium position when the checkered flag flew. 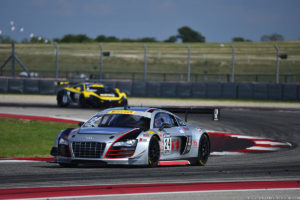 Sunday would see a pair of M1 GT Racing Audis on the podium. Bell and Dayson would continue their string of consistent results with another third place finish while Bowlin and Viljoen rebounded from Saturday’s disappointment to flex their muscles and claim a second place finish, their best of the season.

“What a great weekend for the team. It was so good to be back in the paddock and on the track,” explained Walt Bowlin. “Three podiums for the team was outstanding and this was a great way to end the SprintX season. I want to thank the whole crew for an excellent job this weekend and I look forward to the 8 Hours of Laguna.”

“What an awesome weekend. It was great having both cars running and great dynamic in the team as always,” explained Dayson. “We got some good results but could have had better if luck was on our side. It would have been nice to get a win but it wasn’t to be this weekend. We got lucky with a big hit when I was punted really hard by the over aggressive Nissan on the final lap. We were lucky to be able to continue with minimal damage compared to their car. Sunday I also managed to avoid a big wreck at turn two on the start. Thank you to M1 GT Racing for a great SprintX season.”

“It was a nice way to finish the weekend with a second in class with myself and Walt,” explained Lars Viljoen. “We were fighting a wounded car most of the weekend from damage sustained in practice. We raced with an unbalanced car due to what we think is a damaged damper which could not be repaired during the event. Apart from this I was happy to be back in the M1 GT Racing Audi R8 at the PWC event for my first race of the year. It was fun racing with the best names in the business and I had a blast racing around COTA which is a challenging circuit with every type of corner.”

Viljoen continued, “It was disappointing not to get the Am class win as we had a very strong chance for it but certain things went against us and it was not meant to happen this weekend. We learnt a lot as drivers and as a team and will be ready for the 8 Hours of Laguna Seca. M1 GT Racing did a fantastic job all weekend and it is always an honor to be a part of such a great group of talented people.” 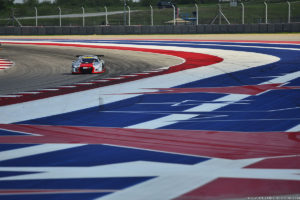 “I had a really successful weekend at COTA and gained valuable experience in the GT3 class and in Audi R8,” explained Jason Bell. “Was great working with all three of my teammates. We had a great time working together. I look forward to racing the car at Sonoma.”

Next on the docket for M1 GT Racing will be the Pirelli World Challenge event at Sonoma Raceway September 15-17, 2017.