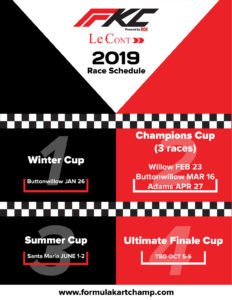 After a very successful 2018 racing season, the Formula Karting Championship (FKC) is ready to kick off its sophomore year in just under three weeks’ time. With the first event dubbed the Winter Cup taking place at the Buttonwillow Kart Track in Buttonwillow, California, FKC enters the 2019 season with renewed focus and energy, as well as a long list of goals for the growing program.

FKC’s concept of ‘Giving Back to the Racers’ continues with the introduction of the Le Cont FIA Formula 4 Driver Search Program and the continuation of its popular Pro-Money Races. With selected money races offered to different classes throughout the season, the total purse of these two programs is valued in excess of $15,000.

The Le Cont FIA F4 Program will provide the opportunities for two Formula Karting Championship drivers to test an F4 car in Mexico, with the possibility to full season race program to follow. Two drivers from Junior TAG100, Senior TAG100 and Senior Open Shifter will be selected with the first of the two being determined at the first event at the Buttonwillow Kart Track. One of the winners in these three classes will automatically be selected and announced at the end of the weekend’s competition.

In addition, the Junior TAG100 drivers will be fighting for a shot at winning cash in the Pro-Money Race during the first event. The top three drivers will be awarded a minimum purse of $500, which could be more depending on the total numbers of entries.

In addition to its popular 100cc TAG, KPV classes, Open Shifters (KZ, Honda 125 and Modified Honda 125) and Junior TAG100 from 2018, there will be a few new classes added to the program for the 2019 season. FKC will be running a TAG125 class (Senior & Master) and a TAG Cadet Class (Mini ROK & Mini Swift). Le Cont Tires will continue to be the exclusive tire supplier for these classes.

Four FKC ROK Cup champions will also be crowned in 2019 in the ROK Shifter, and ROK Senior and Masters divisions. These classes will be running ROK Cup USA rules and the champions of the all ROK Cup USA classes will each win an entry ticket including race tires, fuel and mechanic passes to the ROK the RIO event in Las Vegas at the end of October as part of the sponsorship from ROK Cup USA.

Details of the class structure and complete Formula Karting Championship race schedule can be found online at the FKC website, www.racefkc.com. 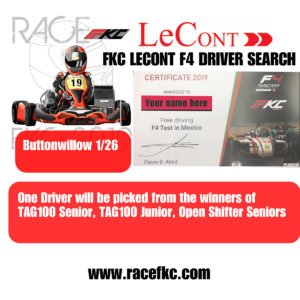 “The Formula Karting Championship invites and welcomes everyone to come and race with us whether you are a national champion, a rookie or an avid club racer,” explains FKC President, Kalvin Chen. “All racers and all teams are created equal. As long as you want to have fun, we have a class for you. This year we added an event in Santa Maria in addition to Willow Springs, Buttonwillow and Adams Motorsports Park to our schedule, and some new sponsorships to our program. With the continuation of the strong support from Le Cont Tires, our club racers will continue to benefit from a great product as we will pass these prizes onto our racers. I am excited about this year, and can’t wait to see everyone trackside!”

Registration for FKC’s first race at Buttonwillow is now open and can be found by visiting the MotorsportReg.com website.

For more information on the on the Formula Karting Championship, please feel free to contact FKC’s Kalvin Chen via email to formulakartingchamp@gmail.com.