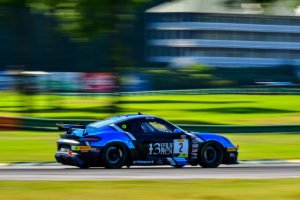 It was a busy, yet successful race weekend this past weekend at the Virginia International Raceway (VIR) for GMG Racing pilot Jason Bell. Competing in three different divisions and participating in eight races over the five-day event, Bell chalked up five podium results and six top-five finishes and will now shift his focus to the next event at the ultra-challenging Sonoma Raceway.

Due to the cancellation and movement of some races, Bell saw action in GT4 Sprint, GT4 SprintX with co-driver Andrew Davis and GTSC over the weekend. With a Promoter’s Test Day on Wednesday to get up to speed and reacquainted with his Porsche machines after a nearly three-month delay, it was into official practice on Thursday before wheel-to-wheel action commenced Friday and rolled through the weekend.

Competing in the all new GTSC class, Bell garnered a pair of second place podium results over the weekend. A new class in North America competition, Bell jumped at the opportunity to compete and was rewarded with back-to-back second place results.

“The GTSC is new to North America in 2020, and I am a proud supporter,” explained Bell. “I believe in the class and am doing my part to help grow it. Putting another car on track is the least I could do but at the next round we will be shooting for victory.”

Competing in the GT4 Sprint division, Bell had three opportunities to stand on the podium and did so in the third and final race of the weekend. Steadily improving his results from day-to-day, the Floridian finished ninth on Friday in the Am Class before progressing forward to finish fifth on Saturday. It was another jump forward on Sunday as he took his GMG Racing Porsche closer to the front and celebrated on the third step of the podium Sunday.

The most success on the weekend came from the GT4 SprintX division along with co-driver Andrew Davis. Competing in the Pro/Am class, Bell and Davis drove to a pair of third place results in race one and two and were looking for more in race three before contact forced them to the sidelines. In the hour-long races with a mandatory driver change, the GMG Racing duo proved their prowess in the front three and confirmed their threat for race wins and more podium results in 2020.

Bell added, “It was a good but long week. Eight races are a lot in the heat of the summer, but we survived and live on to race again. It is always a pleasure to race alongside Andrew as he is a true professional of the sport and elevates my game a ton. Thank you to the GMG Racing guys for all of their hard work and support throughout the weekend. If it was not for them, none of this could be possible.”

Jason Bell will return to the track in just over three weeks’ time as he and his GMG Racing crew head west to California. Competing at the famed Sonoma Raceway, Bell will look to maintain and improve on his five-podium weekend out West.

Jason Bell would like to thank all of his partners for their continued support. A huge thanks to GMG Racing, Kavana Rum, Ceramic Pro, Highway Systems Incorporated, Osteria Tampa, and Frost NYC.