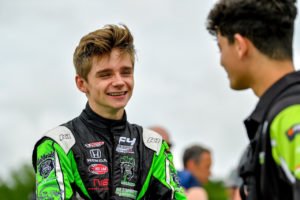 Making his F4 United States Championship Powered by Honda series debut, Canadian Ryan MacDermid was looking to check a few boxes on his list of goals. As a rookie in the series, MacDermid was making his first career start during his first visit to the fast and flowing Road Atlanta, but was looking to impress in his Alliance Racing Sponsored by Gas Monkey #16 machine.

“While I want to win and be on the podium, I had also set realistic expectations for myself,” explained MacDermid. “Finish in the top-ten, score points, improve my finishing position from my starting position and no damage were the four major goals this weekend, and we accomplished them all.”

Progressing through the promoter’s test day and then the official practice day with top-15 speed, torrential rain, flash flooding, and damaging winds moved through the area on Thursday evening wreaking havoc at Road Atlanta. With some teams having damage to their paddock space and lightning still lingering in the area, series officials made the call to cancel the one and only qualifying session on the weekend and assemble the grid from the practice times the day before.

With the 15th quickest lap on Thursday, MacDermid lined up for his first standing start of the year inside row eight. Rocketing off the line and quickly advancing forward, the Canadian used his wet weather experience from January and February test events to tiptoe his way around the 2.54 mile, twelve corner circuit. Closing his first wheel-to-wheel action in the tenth position, MacDermid checked three boxes off of his goal list for the weekend.

MacDermid continued, “I improved on my starting spot, finished in the top-ten and scored my first point of the season. Also, I had good pace which gives me a great starting spot for race two. Race one was a definite success.”

Showing speed, the young Canadian claimed the fifth fastest lap, and with the lap times from race one setting the grid for race two, would line up in row three for the second round on Saturday morning. With rain continuing to fall throughout the state of Georgia, it was back to wet weather Hankook Tires, as drivers from around the world came to grips with a damp, yet drying circuit.

“Race two was not what I had hoped for. Starting near the front of the field, I wanted to capitalize and just made a few rookie errors,” added the Canadian. “I ended up 11th, which is a disappointing result for myself and the team, but I learned a lot and will take that experience with me as I continue throughout the 2019 season.”

Ryan would kick off round three on Saturday afternoon from the 16th position and again, march his way forward. Driving into the top-ten on occasion, the final checkered flag flew with a 12th place finish, but a completed checklist for the weekend.

Completing every race lap and no damage, MacDermid proved that he is a to- ten driver in the series scoring points in his first career event. With a new set of goals set for the second event weekend of the year, look for MacDermid to be even further up the grid as the series takes its next green flag in June.

For information on Ryan MacDermid, please visit him online via his social media channels by searching Ryan MacDermid Motorsports.