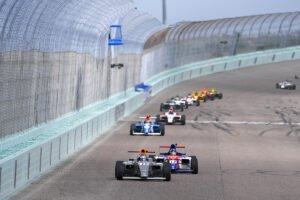 With the goal to improve on his career best finish, Erik Evans did just that this weekend during round fifteen of the F4 United States Championship Powered by Honda. Continually marching up the results sheet all weekend long, the Velocity Racing Development / Storm & Savage Apparel #29 machine finished seventh, fourth and second adding three points scoring finishes to his yearly total. Following the conclusion of the final race of the weekend and after podium celebrations were complete, Evans was awarded the victory after the race winner, his teammate, was given a five second time penalty.

With a disappointing qualifying run that saw drivers switch from wet to dry weather Hankook Tires late in the session, the Storm & Savage backed driver turned the eleventh fastest time and would start his first wheel-to-wheel action from inside row five. With the first attempt at the race early Saturday afternoon aborted for severe weather, series officials opted to run the race later in the day.

Looking to score more valuable championship points, Evans was able to march his way forward as the heavens opened and slick conditions were presented to all drivers. In a race that featured two caution periods, Evans was able to advance forward four positions and finish seventh. Scoring the seventh fastest lap of the race, the #29 car would start inside row four for the first race on Sunday.

With the track drying before the green flag would fly Sunday morning, Evans took advantage of a solid start to move from seventh to fifth on the opening lap and climbed into a podium position before the halfway mark. Turning consistent lap times while trying to keep his competitors at bay, the young talent fell back to fourth narrowly missing his second podium result of the season.

“It was qualifying that hindered my result in race one but a good lap time in race one allowed me to move a little further up the grid for race two,” explained Evans. “I was able to have a great opening lap and pick off two more cars but really wanted that podium result. The good thing about triple header race weekends is that there is another opportunity this afternoon but pretty happy so far with two points scoring results.” 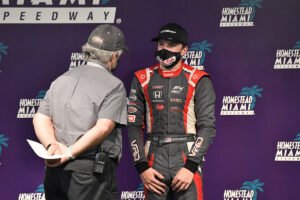 The third and final event of the weekend netted Evans his best result of the season as he was the back end of a VRD one – two finish. Moving forward to the second position early and maximizing his pace on each and every restart, Evans put pressure on Hunter Yeany as the two battled for the win. Racing hard but clean, Evans closed his weekend with a second-place result but was elevated to the top step of the podium following the penalty given to teammate Yeany.

“Definitely not the way I wanted to win my first race,” added Evans. “Of course, I am happy to gain twenty-five points and be awarded the win but would like to have won on track. However, I am happy and maybe this is the start of a run to close the season strong.”

With only two weeks off until the next event, Erik Evans will return home and begin preparation for the Circuit of the Americas. Taking place over the October 23-25 weekend, Evans will be looking to climb one more step on the podium and end the season with a victory.

To view the STORM + SAVAGE t-shirts and hats, or learn more about this growing apparel company, please visit them online at www.StormAndSavage.com and be sure to follow them on Facebook and Instagram by searching @StormAndSavage, or follow their hashtags, #stormandsavage, #iambeast, and #thebeastwithin.

For more information on Erik Evans, please contact RTD Media & Management at Info@RaceTechDevelopment.com or follow him via his social media channels by searching @ErikEvansRacing.