In the first round of the MAXSpeed Entertainment US Open held April 21-24 at NOLA Motorsports Park in Avondale, Louisiana, Energy Kart USA drivers racked up several solid finishes on fast and challenging layout. With multiple drivers competing in the gearbox classes, Energy Kart USA continued to promote the Stock Honda shifterkart program and in the process, claimed a pair of podium finishes.

In the Senior Shifter class, Sabre’ Cook finished six of ten sessions on top of the leaderboard. The talented female won the weekend’s first heat race and set fast lap on the way to a second place finish in the final. Teammate Carson Mueller finished 11th in his second ever race in the senior class. Jeremy Lee, back in a kart after a two-year break, claimed the 13th position in the final while Ryan Lankenau finished 14th in the class and continues to make huge strides with each and every race weekend.

In the Shifter Masters class, Jerry Rhodes claimed the final step on the podium in third, despite developing motor issues in the final. Teammate Hugh Templeman crossed the line in fourth, getting his 2016 season off to a good start. 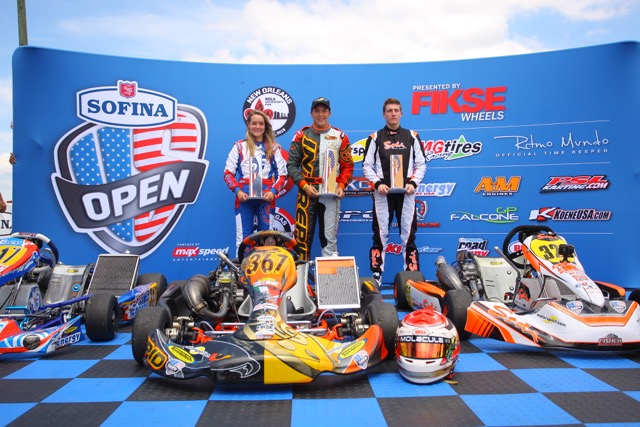 “Energy Kart USA drivers showed a lot of speed this weekend,” exclaimed Stacey Cook, team owner of Energy Kart USA and United States importer for the Energy Kart product line. “With such a strong driver lineup, I expect that as the season progresses and we turn more laps, each of our drivers will be even bigger threats each weekend.”

The team now turns its attention to the next two races: the US Open of Utah to be held June 23-26 in Salt Lake City, Utah and the Superkarts! USA (SKUSA) SummerNationals, which will be held July 23-25 at New Castle Motorsports Park in New Castle, Indiana.

Energy Kart USA would like to thank all of their partners for their continued support. A special thank you to WR International, AIM Sportsystems and New-Line Radiators.

For more information on Energy Kart USA please contact them at 970-256-0109 or via email to Stacey@EnergyKartUSA.com.