With the first of two events in three weeks in Las Vegas, Nevada now complete, Team Koene USA will enter eleven drivers in the final round of the Superkarts! USA (SKUSA) Pro Tour November 16th to the 20th. Descending on the Las Vegas Convention Center for the annual SKUSA SuperNationals, a stout field of drivers will enter multiple classes as the Indiana based team closes out the 2016 season.

“We had great success last week at the US Open finale,” explained Team Prinipal Mike Maurini. “Jak Crawford was able to take the Rotax Mini Max race win and championship while Dale Curran, in only his second event with the team, was able to stand on the podium in P2. James Egozi had to come from deep in the field after unfortunate circumstances in the first heat but was able to add a third place podium result to his Rotax Micro Max season. Now, we will enjoy a few days off before returning to Vegas to hunt for more race wins and championships.”

Leading the way into Sin City will be X30 Junior driver Zoey Edenholm. Courtesy of the one race drop, the Arizona resident leads the overall championship standings by a mere point heading into the biggest event of the season. With a pair of podiums at the latest Pro Tour round in Indiana and multiple wins throughout the country in other series of competition, Edenholm and Team Koene USA are looking for the top step of the podium in both the race, and the overall series title. Joining Zoey in the X30 Junior class will be Alejandro Jaramillo, who has shown the speed to compete in the talented Junior field and will be a threat at the temporary circuit in Las Vegas.

The majority of the Team Koene USA entries will come from the X30 Senior class as five drivers will throw their hats into the mix. Zach Holden, who was the X30 Vice Champion in 2015, will look to make his mark in the Senior ranks building off of his race wins in the United States Pro Kart Series competition this season. Roman DeAngelis will trade in his F1600 car for a Team Koene USA Tony Kart as he returns to his roots for one more SuperNationals. Nathan Ratton, who has shown that the Envico Tires and IAME engine package suits his driving style, will enter the X30 Senior ranks as he looks to utilize the speed and experience from both Holden and DeAngelis in his quest for a strong result to close the season. 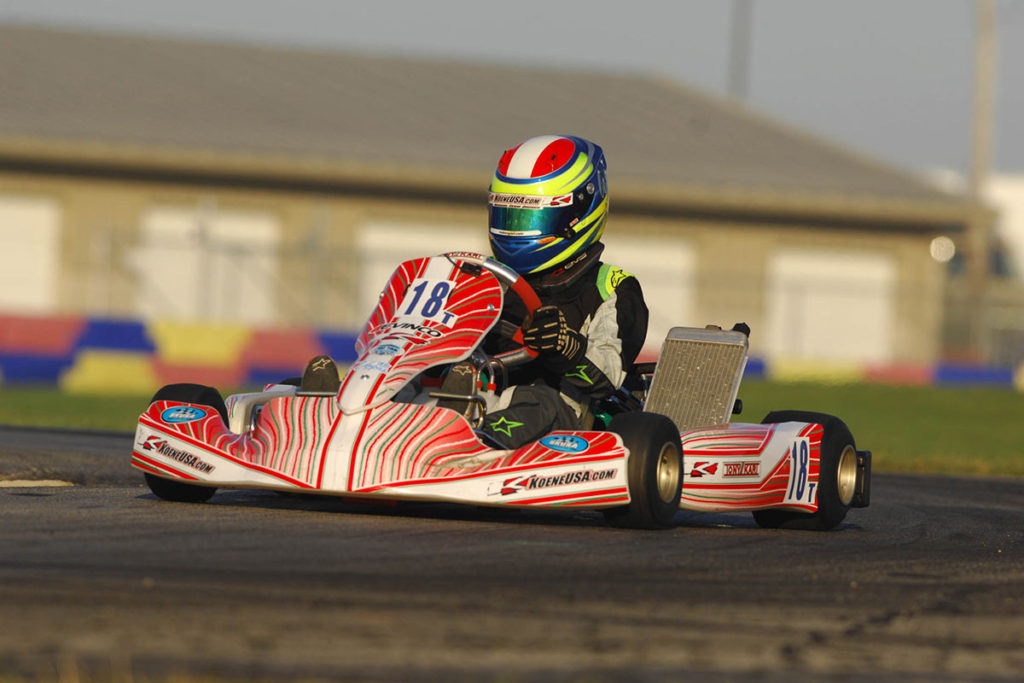 Also entering the X30 Senior ranks will be Haopeng Zhang and Yan Liang, both who competed with Team Koene USA earlier in the 2016 season. Both drivers have gained almost a year’s worth of experience of racing competition from around the world and will round out the five Team Koene USA drivers in the X30 Senior division.

Armando Watson will make the trek from his home in Peru to once again battle the X30 Masters class at the SKUSA SuperNationals. Having top-five speed in 2015 but no racing luck, Watson is looking for redemption in 2016 as he teams with Koene USA and team tuner Richard Hergink.

James Egozi and Dale Curran will both enter the IAME Mini Swift class and both were podium winners last weekend at the temporary circuit for the US Open finale. With the barrier experience and the momentum from strong runs already in the month of November, both drivers will be looking towards the front of the field.

Victor Jimenez will pilot a Team Koene USA entry in the S4 shifter class. Returning from an overseas business trip on Sunday and due to missing the opening day of practice, Jimenez has also entered the S2 class to help with track time leading up to Championship Sunday.

For more information on Team Koene USA, please contact Mike Maurini via e-mail to Info@KoeneUSA.com or by phone to 317.270.8723.