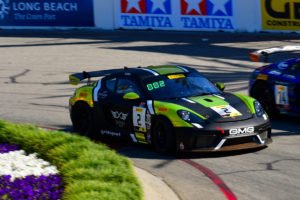 Competing on the barrier lined Streets of Long Beach, GMG Racing driver Jason Bell visited the temporary circuit in Southern California for the very first time. Throw in a new and difficult track to learn, Bell was also coming to the grips with his brand new Porsche 718 Cayman GT4 CS MR as he competed in the Pirelli GT4 America program. Running alongside the NTT IndyCar Series and IMSA WeatherTech SportsCar Championship, the GT America drivers saw two practice runs, one qualifying session and their main event Sunday morning in front of packed grandstands.

“The Streets of Long Beach are no joke,” explained Bell. “The track has some very bumpy areas but is a blast to drive. The atmosphere around the whole event is something that I have not been a part of and it is one race that will be on my calendar for years to come.”

With one and only practice session late on Friday afternoon, Bell learned the circuit en route to the ninth quickest time of the session. Pouring over data that evening and working with his GMG Racing crew, Saturday morning’s practice, just before qualifying, yielded the sixth fastest lap and all things were looking positive heading into qualifying.

Bell continued, “The session just before qualifying went really well. Unfortunately, there was a short break, and I think we were caught out by tire pressures or something. Our qualifying lap was more than half a second slower than our practice two lap, and I ended up P9.”

Taking the green Sunday morning in front of a packed house, Bell started inside row five. With his main goal to bring his car home while advancing forward as far as possible, the Tamp Bay, Florida resident leveled up one position to eighth before the final checkered flag flew.

“I have a lot to learn about this new Porsche 718 Cayman GT4,” added Bell. “I think we had a good handle on it setup wise, but the driving style differs a lot from my previous car. We will continue to push in and work hard towards the next event.”

Jason Bell would like to thank his partners for their continued support. A special thanks to Highway Systems, Incorporated, Kavana Rum, Continental Benefits, Osteria, Frost NYC, Gridsport, and Global Motorsports Group.

The next event for Jason Bell will be at the famed Virginia International Raceway over the April 16 – 28 weekend. Stay tuned to GT4-America.com for series news, information, results, photos and more.