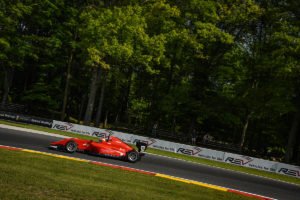 Coming from a fuel leak in qualifying to an eighth place finish, Canadian Antonio Serravalle pushed forward to salvage a respectable result at the famed Road America. Racing for the Pserra Racing program in conjunction with Jay Howard’s Driver Development effort, Serravalle will now shift his focus to the Road to Indy Series Test before his home event on the Streets of Toronto.

Claiming the tenth fastest lap in the one and only thirty-minute practice session, the young Canadian secured the 12th position for the start of race one. Returning to the track on Saturday morning for the second round of qualifying, Serravalle and crew noticed liquid below his Indy Pro 2000 machine. Upon further inspection, Pserra Racing found that the fuel cell had been punctured and would need to be replaced.

“We had a fuel leak and unfortunately, could not get it repaired in time,” explained Antonio Serravalle. “It is disappointing to miss a full session of track time in qualifying and then race one, but it needed to be fixed before we could get back on track.”

“A fuel cell replacement is a big job,” explained Peter Serravalle. “We had to split the car in two, take out the fuel pumps and filters, remove the floor and change the cell. We then had to put it all back together and ran out of time before the green flag flew for race one. Rather than rushing the job, we worked methodically to ensure all was well for the second race of the weekend on Sunday morning.”

Starting outside row six in the 12th position, the Pserra Racing driver and multi-time karting champion drove forward and into the top-ten. Even with less track time than his fellow competitors, Serravalle managed to show speed moving forward into the eighth position before the checkered flag would fly.

The younger Serravalle continued, “I think we had a decent result considering the adversity. We also had two less on track sessions than our competitors, and at an event when track time is limited, that definitely hurts.”

Looking to take advantage of the Road to Indy series test this weekend at the Mid-Ohio Sports Car Course, Serravalle will then begin preparation for his home event. With experience on the Streets of Toronto in an Indy Pro 2000 car in 2018, the hometown kid will look to battle at the front of the field on Canadian soil.