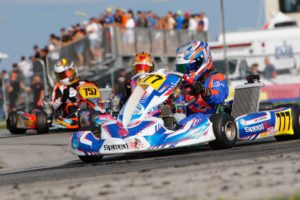 Heading back to Las Vegas for the second time in the past three weeks, Speed Concepts Racing will enter eight drivers in the annual Superkarts! USA (SKUSA) SuperNationals. While a pair of drivers will pull double duty competing in two classes over the weekend, all eight will hit the track this coming Wednesday at the RIO All-Suites Hotel and Casino.

“It is one of those months where there is a lot of racing but we would not have it any other way,” explains Team Owner Mike Speed. “Two trips to Las Vegas in three weeks and a pair of major events to cap off the season is tough, but we have some time off after this event to get prepared for our 2019 season which begins promptly in January.”

Three drivers will enter the X30 Junior category as Justin Arseneau, Luca Mars, and Kyffin Simpson are set to do battle in what could be one of the toughest classes on the weekend. All three drivers have shown tremendous speed and improvement through the year, all taking turns at the pointy end of the field and running inside the top-five. Mars and Simpson will pull double duty on the weekend, as they will also compete in the KA100 class.

Speed continued, “Our junior drivers have been on their game and they really push each other to do better. I have a good feeling about this trio and am confident that they will challenge for the win.”

Four IAME Mini Swift drivers will compete under the Speed Concepts Racing tent this coming weekend as Noah Baker and Paul Bocuse will fly the SCR colors and be joined by team newcomer Wyatt Vidovich. Both Baker and Bocuse have had their share of success in 2018 as the duo performed well at the finale event of the SKUSA Pro Tour back in August and in karting events throughout the state of Florida. Vidovich joins the Florida based team after a late cancellation by a Junior driver and will look to learn from one of North America’s best karting operations. Rejoining the Speed Concepts operation for the SKUSA SuperNationals will be European front-runner and race winner Alex Powell. The young driver has been a on a tear at high profile events for the last half of the season and will be in the running for the win on Super Sunday. 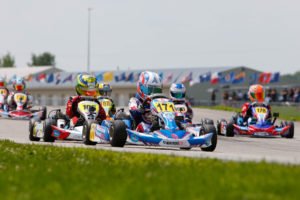 “The Mini Swift class is one of my favorites as I love to work with the kids and help them achieve success,” adds Driver Coach Alex Speed, who works the data center and provides setup advice for the team. “I think we learned a lot in our most recent parking lot event and think we can put that knowledge to good use this coming weekend.”

X30 Masters pilot Scott Roberts has to be one of the favorites heading to Las Vegas. Flexing his muscles at the SKUSA Pro Tour event at New Castle Motorsports Park, Roberts battled for the win in both days’ main events but came up just short. Working hard to make sure he is ready for Vegas, Roberts is committed to putting Speed Concepts Racing on top in the Masters class.

Drivers will hit the track Wednesday, November 14th for official practice with qualifying and heat races on Thursday, Friday and Saturday. Pending heat race and last chance qualifier results, Super Sunday is one of the biggest karting days of the year, as champions of SuperNationals 22 will be crowned. Be sure to follow Speed Concepts Racing on Facebook, Twitter and Instagram for news, results, and photos. Find us at ‘Speed Concepts Racing’ or @SCR_Karting.