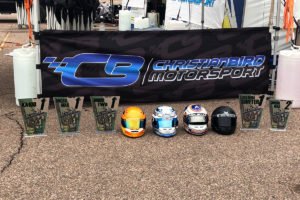 With the second round of the Colorado Karting Tour taking place at the Pikes Peak International Raceway, Christian Bird Motorsports entered eight drivers across several different classes. Competing on the Christian Bird designed temporary circuit, team drivers walked away with four wins and five podiums, and quickly shifted their focus to the next event. Leading the way with victories were Quinton O’Donnell in KA 100, Timmy Trostel in Junior 2, Elijah Khrestov in Micro Max and Christian Bird in Stock Honda Shifter.

“It was a great weekend at Pikes Peak for the entire team,” explained Christian Bird. “We had drivers scattered across several classes and showed great pace in each. With a little luck, we could have walked away with two or three more wins.”

Colton Timmons would do battle with Bird in the Stock Honda Shifter class as the duo looked to be the dominant drivers throughout the field. With Bird taking the win, Timmons was primed for the second step of the podium until contact ruined his day. Liam Letzsch, competing in Rotax Junior had a terrible qualifying session after being caught up in an on-track incident and started the prefinal shotgun in the field. Driving like a seasoned veteran, Letzsch marched his way forward to claim a second place result, and though he had the pace to top the podium blocks, he would just run out of time and laps before the checkered flag flew.

Khrestov was one of several drivers pulling double duty this weekend and garnered a race win in Micro Max. Struggling a bit in Junior 1 Cadet, the young talent ended his day with a ninth place result and will look to rebound in a few weeks’ time.

Hayden Moody added a top-five finish in KA 100 crossing the stripe in fourth. Looking to improve on that result in 206 Light, Moody was a victim of a broken chain early on in the race and failed to complete the full race distance. Dave Williams showed podium pace in in Junior 2 en route to a sixth place result while in Rotax Junior improved dramatically from his first race, finishing in the eleventh position. Expect big things from this young talent in the very near future.

Trostel secured the victory in Junior 2 in a thriller of a main event and nearly added his second podium finish of the weekend, claiming the fourth position in Rotax Junior. Quinton O’Donnell swept the weekend in KA 100 securing the pole position, prefinal win and main event victory.