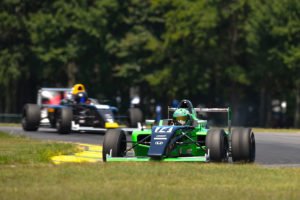 After his most consistent race event of the year at the Sebring International Raceway back in mid-September, Dylan Tavella is looking to carry that momentum into November. Competing in the final round of the F4 United States Championship Powered by Honda alongside the Formula One World Championship, Tavella will take on the picturesque Circuit of the Americas facility in Austin, Texas.

Scoring a podium at the most recent event weekend, the Alliance Racing Sponsored by Gas Monkey Energy driver will look to progress that into a race win in Texas.

“As a team, we had a great event in Florida, and I think that momentum from that event will be huge heading into COTA,” explained Tavella. “We have very limited track time during the F1 weekend, but I did compete at the F4 finale in 2018 and will look to use that experience this year.”

Tavella, who will likely return for another F4 campaign in 2020, currently sits seventh in the overall series championship but has been a consistent top-six driver all season long. With the goal to finish the season strong, the Massapequa, New York resident has already secured testing opportunities in the off season as he looks to get a head start on 2020.

Tavella added, “Our plans are not 100% confirmed for next year but I have a pretty good idea on what I want to do. I have had a good learning year and as a team, we have improved the car and shown speed at most events. 2020 is the year I want to make a run at the championship, score race wins and challenge for podiums during each and every race weekend and that starts this coming weekend at COTA.”

With the condensed weekend schedule, Tavella will hit the track Friday morning for the one and only F4 United States Championship Powered by Honda practice session. Friday afternoon will see the Ride With Dylan foundation driver qualify before race one goes green Saturday morning. The final event of the 2019 season will roll off the grid on Sunday morning. Stay tuned to the Ride With Dylan Social Media pages for up to date news, information, photos and results from the event.