DYLAN TAVELLA CLOSES HIS MID-OHIO WEEKEND ON THE PODIUM

It was back to the Mid-Ohio Sports Car Course this past weekend for rounds seven through nine in the FR Americas Championship Powered by Honda. With multiple podiums and wins under his belt already this season, Tavella and his Crosslink Kiwi Motorsport outfit would strive for more at the tricky 2.258-mile, 13-turn layout in Lexington, Ohio. 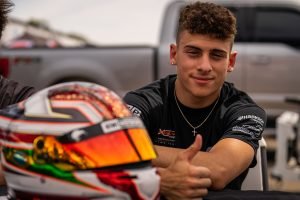 Friday proved to be a little troublesome for Tavella as qualifying only yielded the fifth fastest lap of the session. Not pleased with his results, the mechanical engineering student would turn to the wheel-to-wheel action in his quest to climb up the results sheets.

“I am definitely not happy with a fifth place effort, but I have won from starting further back before and that will be my intentions tomorrow,” explained Tavella. “I have one of the best teams in the paddock behind me, and I know I have the equipment to win. I need to execute when it matters and that is the goal.”

Rocketing off the line and quickly gaining two positions, Dylan Tavella closed the first lap in the third position as he set out to attack the leaders. As one of the quickest cars in the first few laps, Tavella faded later in the race to finish 5.320 in arrears of the eventual race winner in the fifth position, adding more valuable points to his championship aspirations.

Following suit in race two, Tavella had an uneventful 22-lap race that saw him cross the stripe in the fourth position despite clocking the third fastest lap of the race. Knowing that he would not be in contention for the win, it was damage limitation regarding championship points as Tavella shifted his focus to the third and final race of the weekend on Sunday afternoon.

With rain falling before the start of race three, Tavella would switch to wet weather Hankooks as he welcomed the opportunity to make his way forward. Starting from row two on the grid, the #14 entry instantly moved into the second position before the end of lap one and held that position for the remainder of the race to cross the line in second and earn his first podium of the weekend.

Next up for Dylan Tavella will be a trip back to the East Coast and his hometown event at New Jersey Motorsports Park. A winner at the facility in the karting racks, Tavella will once again aim to climb to the top of the box over the July 29-31 weekend.