DOUBLE VICTORY FOR ARIAS DEUKMEDJIAN AT THE SUPERKARTS! USA SPRINGNATIONALS 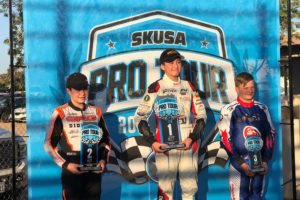 Traveling to the PKRA facility with one goal, Floridian Arias Deukmedjian achieved what he had set out to do by the end of the day on Saturday. Competing in the X30 Junior class at the Superkarts! USA (SKUSA) SpringNationals, the talented Deuk Spine Institute sponsored driver improved from his seventh place qualifying effort to stand on the top step of the podium and claim his first SKUSA Pro Tour victory. Back to the track on Sunday, Deukmedjian repeated his feat adding a second win on the weekend and solidified his position in the championship points battle.

“Today was a good day,” explained Deukmedjian as he commented after the podium ceremonies Saturday evening. “I would have liked to have qualified better but I was extremely happy with our pace. A good start in the main event put me in the position to win and I was able to capitalize.”

Progressing through Friday’s official test day, Deukmedjian entered Saturday’s qualifying sessions unsure of his speed. Qualifying in the seventh position, the Korean American driver started his prefinal inside row four and claimed the fifth position when the checkered flag flew. In the main event, the Leading Edge Motorsports driver got a great start and moved into the top-three. Biding his time and saving his equipment, Deukmedjian took the lead just after the halfway point and never looked back. 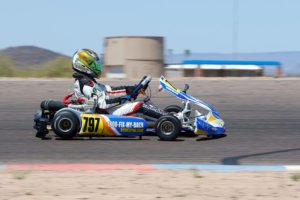 Back to the track on Sunday, the 2018 race winner in both karts and cars was hoping to repeat his main event performance from Saturday. Starting the day of with a time that would put him outside of row four for the prefinal, Deukmedjian had one of his standard drives forward, gaining six positions and a second place result along with a front row starting position for the main event.

When the green flag flew Sunday afternoon, Deukmedjian would slot into the second position before falling back to third in the opening laps. Once again, maintaining his equipment and biding his time, the Floridian methodically worked his way to the point before the race was halted due to a red flag at the halfway point. Leading the field back to the green, Deukmedjian got a jump on his rivals and never looked back scoring the victory by 1.026 seconds, his second win in as many days.

Deukmedjian added, “What a weekend! A huge thanks to Leading Edge Motorsports, SuperTuners Inc., Wolter Racing Engines, Tillitson Carburetors, Deuk Spine Institute as well as my friends and family for all of their support.”

Be sure to follow Arias Deukmedjian on Facebook, Twitter and Instagram for continues updates and behind the scenes look into his life in both racing and other extra curricular activities. Find him at ‘Arias Deukmedjian’ or @A-Deukmedjian. 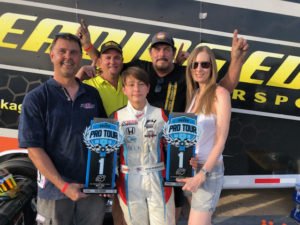 For more information on Arias Deukmedjian and his racing program, please contact Info@RaceTechDevelopment.com.