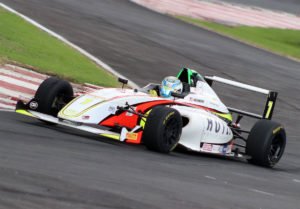 Continuing with his jam-packed 2019 season, Texan Jak Crawford had a dominant weekend south of the border. Taking on the F4 NACAM program with the Martiga Mexico Race Team, the talented young American scored two pole positions in the one and only qualifying session before victories in race one and three on the weekend. Not to be out done, the talented competitor secured another podium result during the second wheel-to-wheel battle, a total of three on the weekend.

“Incredible weekend in Mexico and I would have been able to go three for three if I wasn’t the victim of multiple, 130+ mph dangerous blocks by a fellow competitor who was forced into the pits for a drive-through penalty,” expressed Crawford. “Earlier I had my first real crash on my own in a car on Friday during practice, but the team did a great job in getting everything put back together in race winning form. I put the incident behind me and once I was back in the seat, I was completely comfortable from the very first lap. The team deserved a triple victory.”

Taking Saturday’s pole position, Jak led the field to the green during race one that afternoon. Getting the jump and grabbing the lead early, Crawford drove to an incredible, nearly seven-second win, confirming his threat for the overall series championship.

Crawford added, “My closest competition lives here in the area. This is his home track and his team’s home track so to come down here, get up to speed and dominate is special. We had the same pace at this track in the spring race but engine trouble derailed me in qualifying and the races. Our bad luck in Mexico finally changed a little.”

Jak was forced to start race two from the second row with an inverted portion of the grid for race two. Running in the third position, the driver in front was given a black flag. In an unsportsmanlike maneuver, the penalized driver slowed his paced, blocked and swerved around the track in front of Jak’s #7 entry following the black flag and before his drive-through penalty, increasing the gap to the leader and slowing Jak’s overall pace. Unable to regain the lost ground and losing a position due to the accordion effect of all the drivers behind now bunching together, Crawford finished the second event of the weekend on the podium in the third position. 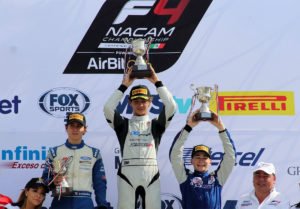 Courtesy of his quick time during Saturday morning’s qualifying effort, the 14-year-old started race three from the pole position. Once again, and very similar to the weekend’s first wheel-to-wheel action, Crawford controlled the race from the opening lap, taking another commanding win by almost ten seconds, his second of the weekend.

“We could have easily swept the weekend, but I can’t control another driver’s temper and losing his mind because he wasn’t as fast as me. I watched his line behind him leading onto the straightaways and he wasn’t running the right line, so he decided to race dirty instead of driving like everyone else. He is an older driver compared to most of us in the series so I guess you lose your mind at his age. It is very upsetting as his actions could have had us both hurt at those kind of speeds,” proclaims Crawford.

Taking very little time to celebrate his accomplishments, Jak quickly traveled back home to Texas before jet-setting his way to Elkhart Lake, Wisconsin. Rejoining the DEForce Racing program, Jak will battle the stout competition in the Cooper Tires USF2000 Championship at the famed Road America.

Jak Crawford would like to thank marketing partners: RE/MAX and AmCap Home Loans as well OMP, Bell Helmets, Palmetto MDR and Speedsportz Racing Park. Big shout out to Martiga Mexico Race Team for all the hard work throughout the weekend with a very fast hot rod.