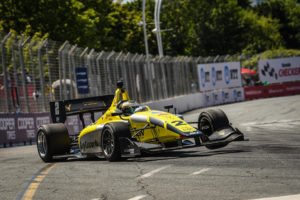 It was a double podium weekend for BN Racing in Toronto, Ontario, Canada as Toby Sowery and Matthew Round-Garrido found their way to the podium steps on Sunday. Taking on the temporary street circuit on the Streets of Toronto, the duo showed speed and strength in their respective series to add to BN Racing’s 2019 podium total.

With one practice session for each of the series on Friday, it was straight into qualifying Friday afternoon for the Cooper Tires USF2000 Championship while Indy Lights Presented by Cooper Tires drivers were off until Saturday morning. Matthew Round-Garrido was poised to be on a flyer of a lap that could have classified him in the top-five, but a yellow flag late in the session forced him to abort. Claiming the 11th quickest time of the session and inside row six starting spot for race one, qualifying two on Saturday morning was again compromised by a similar yellow and red flag as the BN Racing driver secured the ninth position.

Saturday would be the home of the first wheel-to-wheel action of the weekend and Round-Garrido battled hard for three extra positions up the grid. Starting 11th and finishing eighth, the positive momentum and results would come on Sunday. In Race 2, Round-Garrido rocketed his way forward and battled hard all race long. When the final checkered flag had flown, the newest team member of BN Racing secured his first podium of the 2019 season in only his second event weekend with BN Racing.

Toby Sowery scored the best results for the Cooper Tires Indy Lights program with a fifth place finish on Saturday, and a solid second place finish on Sunday. Finishing only behind the current Indy Lights point leader, Sowery provided BN Racing with another podium result, and scored his third podium finish of the season for his personal resume. 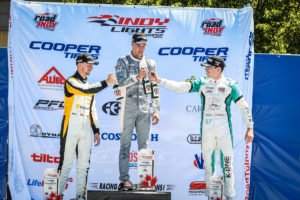 “We had a good battle with Dalton Kellett at the start but then things settled down into something more strategic. I had to be smart with the push-to-pass and the pass on Kellett was more tactical overtaking rather than just full-on,” explained Sowery. “Of course, I didn’t realize it would be for second place. When I saw Aaron and Rinus start to go at it, I thought ‘let’s go.’ I didn’t quite have the pace to keep up with Oliver but I’m very happy with the result. We’re still new to this series, and we’re learning more and more every race weekend.”

David Malukas had a trying weekend north of the border. After qualifying sixth on Saturday and seventh on Sunday, Malukas had two critical errors in the turn eight braking zone while battling for a top-five finish that hindered his end results. Looking to refocus, Malukas as well as his teammate Sowery will be on track Thursday to prepare for the upcoming event weekend at the Mid-Ohio Sports Car Course.