DOUBLE PODIUM FOR TYLER MAXSON AT THE PORTLAND INTERNATIONAL RACEWAY 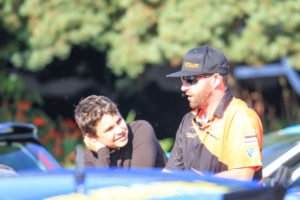 Fresh off a pair of wins at Sonoma Raceway just over one month ago, Copeland Motorsports driver and 14-year-old Tyler Maxson returned to TC Americas action in his hope to continue his recent success. While winning was not in the cards this weekend, Maxson claimed a pair of third place podium results while he battled hard and was in contention to top the steps of the podium.

“The weekend started off really good, and we had good pace,” explained Maxson. “We had a slight error in qualifying that put me back in fourth, but not something that couldn’t be overcome in the race. The Mazda MX-5 car was on rails this weekend thanks to the hard work of Copeland Motorsports, and I think we had the speed to win both days, just no racing luck.”

After a disappointing qualifying session that saw Tyler Maxson back in P4 in the TCA class, the young 14-year-old drove like a veteran as he battled hard for the win on both days of competition. Battling for the lead late in the race on Saturday and suffering from a spin with only ten minutes remaining, Maxson fell back to the ninth position but managed to work his way back forward to finish on the third and final step of the podium.

Maxson continued, “I was following the leader and dropped a wheel and immediately hit the next curb. I thought I could hang onto it but it spun me around pretty quick. Thankfully I was able to get pointed in the right direction and get back to a podium position.”

Sunday proved to be another spirited drive for the youngster as opening lap contact relegated him to the tail of the field before a masterful drive forward. Slicing and dicing his way towards the front, Maxson was in second on the final circuit as he made a bid for the lead and another TCA win. Trying to hold off the advances of the third and fourth place drivers, the 14-year-old double race winner looked for a way around the leader as they both drove quite aggressive as anyone would to get a W. After contact was made and the dust had settled, Tyler was able to add another podium result, his second third place finish of the weekend.

Still in control of the Rookie of the Year honors as well as having a shot at the overall TCA championship, the next event for TC America is over one month away at the famed Watkins Glen International Raceway.