DORAN MOTORSPORTS GROUP VICTORIOUS IN THEIR FIRST EVER FORMULA 4 EVENT 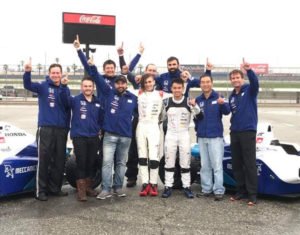 Making a splash, literally, in their first ever Formula 4 event, Doran Motorsports Group claimed one win and three podium results in their debut weekend. Testing for the second half of 2018 and making the jump to wheel-to-wheel competition this past weekend at the Auto Club Speedway in Fontana, California, Alan Tang and Marco Kacic proved to be the pair of drivers to beat in the rain soaked weekend.

After a successful practice day in dry conditions on Friday, the skies opened on Saturday as every remaining session for the rest of the weekend was run on the wet weather Hankook Tires. Running in the rain for the first time ever in an F4 car, both drivers tiptoed their way around the track until they became comfortable with the grip level, pushing harder as the session went on. Kacic claimed the second quickest lap of the session and outside front row starting spot while Tang would line up directly behind him for the start of race one in fourth.

“Race one of the weekend was completed in extremely difficult conditions as heavy rain arrived before and continued throughout the race,” explained Francois Doran, Owner of Doran Motorsports Group. “In the end, we were able to take two steps on the podium. A great start to our 2019 season.”

Leading the way for DMG was Marco Kacic who dominated the wet as he scored his first career victory in his debut F4 event by more than twenty seconds. Alan Tang did an amazing job and brought his DMG F4 machine home in the third position, a double podium in race one.

Doran continued, “It’s an amazing feeling for all of us. We are a small team, we have no fancy transporter, we have no pit lane presence because we don’t have pit vehicles or pit equipment yet. It took us six months to gather enough spare parts to be ready to do our first track day and since last August we have been on track 22 days to get ready for this weekend. Our drivers are as green as they get, it is my first race directing an F4 team, none of our mechanics worked on F4s before and our engineer Brandon Reed is only 22 years old having just graduated from CalState Long Beach last December. In the end, I think we can all agree that hard work and dedication is what made the big difference in this equation. I’m thankful for our successful karting program, race team and kart shop that allows us to invest and develop in this exciting new F4 venture.” 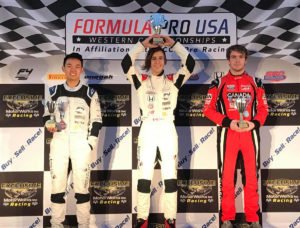 A different day but the same wet weather conditions presented DMG on Sunday as rain fell throughout the night and into the morning. With a short warm-up very early in the morning and race two on the weekend in the middle of the afternoon, conditions would improve, but drivers remained on the wet weather Hankook tires. Kacic began his quest for back-to-back wins from the second position while Tang started race two from P3. Taking the lead early and stretching a gap on the rest of the field, Kacic looked poised to stand atop the podium yet again but an electrical issue with five laps remaining crippled his car to only second gear and forced him to retire. Tang would be a benefactor of Kacic’s retirement and advance forward one position and solidify his second podium result of the weekend, crossing the stripe in the second position.