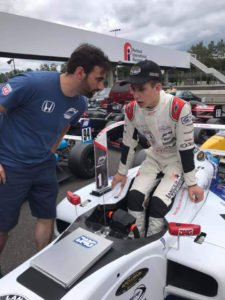 Making their F4 United States Championship Powered by Honda series debut in early November, Doran Motorsports Group (DMG) has confirmed participation at the Circuit of the Americas (COTA) for the 2019 season finale. Set to take on the national level program, DMG has entered the Formula Pro Series F4 West Coast Championship winner Marco Kacic in a one car effort.

“We are really excited to head to COTA and see how we stack up against all the other teams and drivers that have been running the entire series,” explained Francois Doran. “We have one open seat for 2020 for the West Coast Championship and an additional seat for the East Coast. We are counting on a great showing in COTA to help fill those seats and provide increased momentum into next year.”

After claiming multiple race wins in 2020, Marco Kacic is set for his biggest challenge of his very young career. Competing during the same weekend as the F1 event is something special, and Kacic will look to take the series by storm in his one and only F4 US event of the year.

“First off, the 2019 season has been great, and this is a great way to cap it off competing at COTA alongside the Formula One World Championship,” claimed Kacic. “I can’t thank Doran Motorsports Group enough for the opportunity. This team is like a family, and I can’t wait to tackle this with them. I will be striving to learn as much as possible, all while aiming for the best result possible.”

Marco Kacic will be making Southern California his home for the remainder of the month where the team will be focusing on his physical conditioning, mental preparation and keeping him behind the wheel as much as possible.