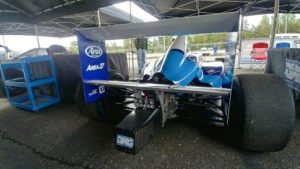 Southern California based race team Doran Motorsports Group (DMG), who is running a consistent F4 Formula Pro USA Series schedule in the 2019 season, made the trek north for rounds five and six of the Western Championship. Taking place at the Portland International Raceway, DMG walked away with one win and three podium finishes, dominating another weekend of series competition.

Unloading their cars and preparing to hit the track for Friday practice, DMG drivers and crew were on top of their game all day setting quick times consistently at the top of the charts. Marco Kacic, averaging over a second quicker per lap than the competition, was feeling confident heading into Saturday’s schedule of events with his Doran Motorsports Group prepared F4 machine.

In similar fashion to the previous day’s practice, Kacic was able to garner the pole position to begin race one on the inside of the front row on Saturday. Not only did Kacic receive a P1 starting position, he was able to secure a lap record in doing so at the Portland International Raceway.

Closely behind Kacic, DMG teammate Alan Tang was pushing his car hard to make up just a tenth or two. During Saturday qualifying, Tang had made a slight contact with the turn 11 wall, causing minor damage to his F4’s front wing. Settling for the third fastest lap of the session and securing the inside row two starting position heading into Saturday’s race, the team worked quickly and efficiently to repair Tang’s car getting it ready to do battle for the day’s main event. 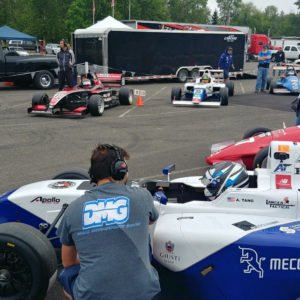 Race one on Saturday provided an interesting battle between the top three drivers in the growing F4 program. Two DMG drivers, along with another F4 competitor, were struggling to race each other while trying to navigate around the slower traffic from competitors competing in a separate class. The class sharing the circuit with both DMG drivers racing for the win happened to be faster on the straights, which caused for the continued dilemma between competitors as they had all taken the green flag together.

The excitement continued throughout the race due to traffic resulting in many lead changes between the four F4 category of drivers with both Marco Kacic and Alan Tang in the mix. Kacic brought his DMG F4 car across the finish line in the second position with Tang closely behind in third, providing another double podium result for the Doran Motorsports Group.

With many teams and drivers unhappy with the way Saturday’s race had played out, the F4 Formula Pro USA series officials had addressed this issue at hand and quickly came up with a solution to split the classes. Utilizing a split class format with a significant gap between the two on the start, action for Sunday was bound to be better for all involved.

Sunday’s racing for the DMG squad started with Kacic on the pole position and Tang directly behind in the third position. As the drivers took the green flag for the start of the main event, Tang worked his way to P2 as Kacic fell to fourth early on in the race. Tang, having his sights set on the lead, was able to take over the reigns while teammate Marco Kacic was still working back through the field after falling back on the start. Kacic slowly began picking off his competitors one by one as his car came in throughout the race. The Canadian driver has been showing his speed in the F4 series all season thus far, and that continued this past weekend. Wanting to finish the weekend strong, Kacic was able to make a pass on Tang with a few laps to go and continued his pace to increase his lead to more than six seconds over Tang before the checkered flag flew. Alan Tang, also having a successful race on Sunday, was able to earn himself the fastest lap of the race and helped bring the team home with their second 1 – 2 finish of the series this season in back-to-back events. 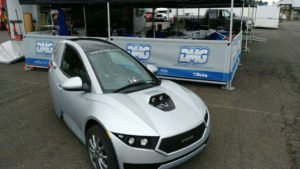 Unfortunately for Tang, the conclusion of the race resulted with receiving a one position penalty from the race steward due to an on track infraction while battling with a fellow competitor and would be classified in the third position.

“There were some adversities this weekend that we had to overcome but our team, drivers, and crew performed with their heads held high, and we are very proud of our accomplishments and pace throughout the weekend,” explained Francois Doran. “I feel that we have a very intelligent group of race engineers making all of the right decisions for our cars and also having Indy Pro 2000 series driver Nikita Lastochkin mentoring Marco and Alan. Everyone is performing at the top of their game and proving positive results every race weekend.”

The team will take their equipment back to the DMG headquarters and begin preparations for the next race. Back at the Sonoma Raceway over the July 6-7 weekend, the team will look to continue their momentum and garner even more race wins and podium results. 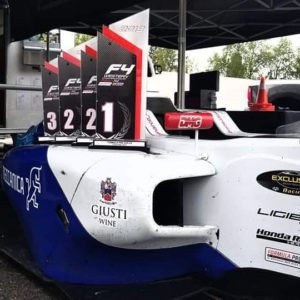