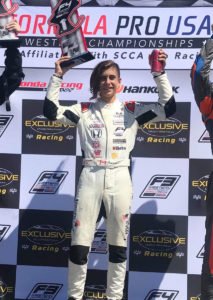 With one event weekend remaining in the 2019 F4 Formula Pro USA Championship, Doran Motorsports Group (DMG) has already secured their first title in their short and storied career. With a pair of victories this past weekend at the WeatherTech Raceway in Laguna Seca, Marco Kacic added to his resume of results and now holds the title of 2019 F4 Formula Pro USA Champion.

“It is DONE!” exclaimed Francois Doran, president of Doran Motorsports Group. “This weekend’s double win allowed DMG and Marco Kacic to clinch the 2019 F4 Formula Pro USA Championship with one race event to spare. Brand new team, brand new group of people, youngest engineer, youngest driver of the field and a Championship Cup that will now be sitting on our desk at DMG.”

This past weekend, DMG took a pair of race wins and an additional third place podium finish, with drivers Marco Kacic and Alan Tang respectively, but it was not exactly straightforward or easy. Kacic had some financial difficulties that prevented him from attending Thursday’s pre-event sessions so he took part in just one practice session on Friday morning to both learn the track, and give his engineer feedback in order to set up the car to his liking. Kacic and Tang qualified third and fourth, but they both knew that they would have more speed for the upcoming race after pouring through data and video obtained from qualifying.

The first wheel-to-wheel action of the weekend was very exciting. Both Kacic and Tang started moving up the grid from their qualifying positions fairly quickly. By the time the final checkered flag had flown, Kacic was in the position to take the win while Tang finished on the third step of the podium. This was Marco’s sixth win of the series and put him in position to mathematically win the 2019 F4 Formula Pro USA Championship if he could finish fifth or better in Sunday’s race.

Back to the track on Sunday, Marco Kacic and Alan Tang once again had to start from the third and fourth positions courtesy of Friday’s qualifying. At the start of the race, the duo showed great speed and found themselves running one-two, but not able to draw away from the field. It was a very intense race with the third and fourth running drivers sticking right with the top-two. Tang made a small mistake that cost him two positions, but he never gave up and worked hard to charge his way back to the top-three. Making a bid for the third position, Tang spun his DMG machine, which unfortunately took him out of contention for the podium. He was able to continue but had to settle for the fifth position, despite having the second quickest lap of the race. 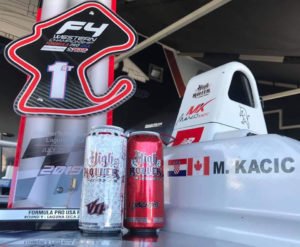 Kacic was able to lead most of the race but dropped to the second position when drivers encountered lap traffic with only two laps remaining. Only needing to finish fifth to clinch the title, Kacic was in position to do so but once a racer, always a racer and he wanted to win. Presented with an opportunity to go for a pass into the corkscrew turn on the last lap, Marco made the pass stick and he took his second win of the weekend, seventh of the series, and captured the 2019 F4 Formula Pro USA Championship.

Capturing the Championship in Doran Motorsports Group’s first year of F4 competition really exceeded all expectations. The DMG team is an amazing group of hard working and talented individuals and this championship was truly a team effort.

The F4 Formula Pro USA series has one more event at the end of next month to close out the 2019 season. Alan is currently only eight points out of third position in the championship and the team is looking forward to closing out the final weekend with some more podium finishes.