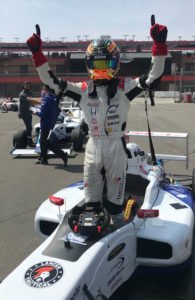 Doran Motorsports Group had another impressive event at the Auto Club Speedway in Fontana, California during another double-header race this past weekend. Taking on the Formula Pro USA Western Championship, Doran Motorsports Group was the team to beat taking home one race win, a pair of second place podium results and four top-five finishes as they now shift their focus to the next event in three weeks’ time.

Teammates Marco Kacic and Alan Tang topped the charts during Friday’s practice and they took that momentum into Saturday morning by qualifying second and third respectively. Saturday’s race had a ton of action as the high banked oval portion of the circuit made it difficult for any one driver to maintain the lead position due to the massive draft. Kacic and Tang were engaged in an intense three-way battle for the lead for several laps until Tang unfortunately developed a shifting issue that took him out of contention for the win. Soldiering on to complete the full race distance, Tang was able to bring his ailing DMG F4 home in the fourth position.

Canadian Marco Kacic continued his battle for the top spot the entire race and when the final checkered flag had flown, was able to secure the win on track. Unfortunately, post event, Kacic was penalized one position for passing under a yellow flag and had to settle for the second step on the podium.

A return to the track for Sunday’s race saw Kacic start from the pole position with Tang lining up directly behind him in third. Once again Tang and Kacic were involved in a very exciting three-way battle for the lead, but this time they were able to break away from their fellow competitor and secure the team’s first one-two finish. Kacic would take the win with Tang following close behind in second. 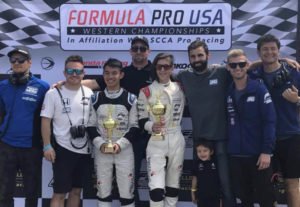 “This was a milestone weekend for the DMG/Meccanica Group,” said Team Principal Francois Doran. “Our first ever one-two. This crew is unreal. The skills of these people, from driving, engineering, troubleshooting and coaching. I love these guys. We were also very happy to have an addition to the team this weekend. Indy Pro 2000 standout Nikita Lastochkin joined us as the team’s driver coach. We are confident we can carry this momentum into the next round in Portland, Oregon in three weeks’ time.”