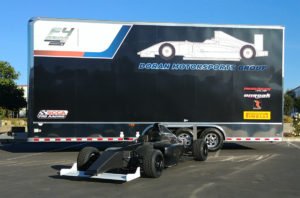 Veteran karting team owner Francois Doran will be taking his Doran Motorsports Group (DMG) team to the next level for 2018 by stepping into open wheel racing. The 38-year-old Canadian and his newly formed team plan on building the best possible West Coast program targeting the karting audience that look to take the next step in their motorsports career.

“The F4 program worldwide is the fastest growing single-seater class and when you mix this great program with a solid market like we have in California it becomes a no brainer,” explained Doran. “What we’ve got with the FIA, Honda, Crawford and Pirelli endorsing the series is the commitment of a group of individuals working for the young racers of the world to guide them toward the very next step of their career and providing them a very cost effective first step.”

The Formula 4 car is Ligier JS built by Onroak in Denver, North Carolina. The K20 Honda powered engine is limited to 160HP with a 6-speed paddle shift transmission.

“I’ve met with Francois and one of his drivers in Chicago last September for a test in an LMP3 and I feel confident he will lead a successful F4 program,” explained Max Crawford, Manager of Onroak Automotive US.

One of the assets DMG can count on to build the best F4 team is the support from Steve and Michael Lewis, consultants of DMG. Steve Lewis is extremely knowledgeable about junior Formula teams and his extended experience and success in the racing industry makes him an excellent mentor. Michael is an excellent driver and has driven for many teams and cars all around the world. He is one of the three DMG driver coaches that will not only better their drivers, but also give his opinion from a driver’s perspective.

“Francois has done a tremendous job over the years with his karting program and has provided first class service for his drivers and clients,” expressed Steve Lewis. “During this process he has learned what it takes to prepare a winning program and how to work with young drivers. This experience will overlap in to Francois’ new Formula 4 program and will give his young kart drivers ‘the next step’ up the motorsports ladder. Francois has the talent, energy, experience and desire to create a Formula 4 program that will nurture young driving talent to be competitive, competent and ready to take on the rigors of a Formula 4 race weekend. “

Doran and Doran Motorsports Group realize the success of a winning team lies within the core of the team. DMG is currently in contact with multiple engineers, including one with experience in the Verizon IndyCar Series and another from the GP2 program.

“We never want to hold back a driver due to our lack of experience and my job as the Team Principal is to make sure that even if my driver is in a learning mode, he or she has the team and the material to win. Along with highly qualified engineers, we are currently in discussion with a professional driver to explore the possibility of an endorsement deal. Being a racecar driver isn’t only about driving a racecar fast. We want to teach our young drivers everything about being a potential future pro driver, from presenting yourself to potential sponsors, developing the driver as brand ambassador, and understanding marketing in the car racing industry.”

The DMG Formula 4 program is designed to give the young driver candidate the “total system approach” to developing his or her overall skill level from the ground up. DMG will encourage all of their driver candidates to take on the responsibility of physical conditioning, diet, off track preparation, along with extensive test programs to build driver confidence and competitive lap times. The emphasis will be on fundamentals, learning to understand the value of data acquisition, what it takes to “prepare” in advance for a race, and supply competent coaching program so in the end, DMG drivers will be able to be competitive on race day.

Less than a month into this new venture, DMG has already ordered a second Formula 4 car. After a social media announcement, DMG has received several serious inquiries from drivers looking to test this summer.

The DMG is making plans to begin in earnest the Formula 4 test program in early summer to evaluate driver candidates for the 2019 season. In the meantime, DMG will begin the all-important process of evaluating driver applicants for these test sessions, which will either be at Buttonwillow or Fontana.