DORAN MOTORSPORTS GROUP ADDS ANOTHER WIN TO THEIR GROWING RESUME 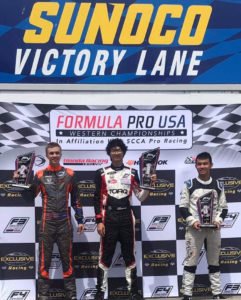 This past weekend, Sim Raceway in Sonoma, California, was the host of rounds seven and eight of the 2019 F4 Formula Pro USA Championship. Taking to the track during Friday’s practice session, Doran Motorsports Group set the pace early and often with Marco Kacic topping the charts and teammate Alan Tang posting the fourth quickest time of the day. Prepared for the weekend’s wheel-to-wheel action, the team left the track Friday evening both confident and hopeful.

Saturday morning qualifying for round seven of the series championship was challenging for all the drivers due to the sheer quantity of cars on track. On track space was a premium and fast laps would be few and far between. Alan Tang secured the fifth quickest time of the session while Kacic put his DMG F4 on the pole position for the sixth time this year.

The first wheel-to-wheel action took place that afternoon with both Tang and Kacic having good clean starts. Unfortunately, Marco’s streak of podium finishes came to an end with his first non-finish of the season due to contact from behind. A fellow competitor made a slight mistake going into turn four on the first lap going too deep on the brakes, locked up, and slid into the back of Marco’s DMG machine. The contact caused damaged to the rear suspension and Kacic was unable to continue. However, Alan Tang had a strong run, making some solid passes to put his DMG F4 on the podium in the third position. 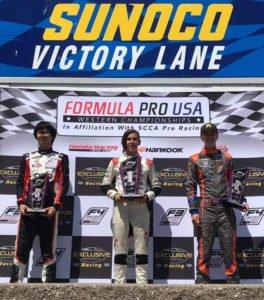 Qualifying for the second race of the weekend, and eighth race of the series, took place Sunday morning. Unfortunately, the short session, only fifteen minutes, was mired by two separate crashes that stopped the proceedings and forced drivers back to the pit lane. Most of the competitors did not even get a chance to put in a quick lap, including both Kacic and Tang, who would have to settle for the second and fourth qualifying positions.

Once again when the green flag flew, both DMG drivers had good and clean starts. Kacic spent the first four laps of the race all over the back of the leader before making his move, an out braking maneuver on the outside, making the pass stick and taking the lead. With great speed, Kacic was able to stretch out a substantial lead and take the win, his sixth victory of the season. With four races left in the championship, Marco Kacic has a healthy points lead and will be looking to secure the championship win early at the next round in Laguna Seca, California, in just a few short weeks.

Alan Tang was having another solid race running in the fourth position when a lapped car spun right in front of him, forcing him to take evasive action, which resulted in him spinning as well. Alan was able to recover quickly, but the spin relegated him down the running order to finish in the fifth position. 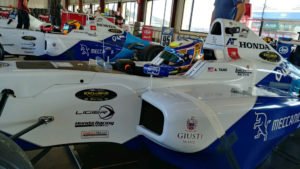 “Another great weekend for our program,” explained Doran Motorsport Group’s Francois Doran. “Our speed in the DMG F4 cars is there, but some bad racing luck hindered some of our performance. On to the next one to see if we can claim even more race wins and podium results.”