DAVID OSTELLA ON THE PODIUM AGAIN IN LAGUNA SECA

Sitting second in both the Driver and Team Championship races, Canadian David Ostella ended the final event of the 2016 Pirelli World Challenge (PWC) SprintX program on the right foot. Taking place at the Mazda Raceway Laguna Seca in Monterrey, California, and with Ostella piloting the M1 GT Racing Audi R8 LMS, the team/driver combo was once again at the pointy end of the field and in the hunt for the race win.

After a successful Promoters Test Day on Thursday and some quality laps on Friday’s official practice sessions, Ostella would take the M1 GT Racing prepared Audi to the top in Friday afternoon qualifying by turning a lap of 1:25.390, quick enough to secure the inside front row starting event for the first of two races of the weekend.

“It was a great session for us and the car was handling really well,” explained Ostella. “Honestly, I just had to hit all my marks and I knew we would have a shot at the pole position. Not only was my quickest lap a good one, I think we were pretty consistent which is exciting for our race pace tomorrow.”

Saturday would see a long wait as the PWC SprintX program would be the final wheel-to-wheel action of the day late in the afternoon. With Ostella leading the 24 car field to the green, a slow start would see him yield the top position entering corner one. Sitting second for his entire stint, occasionally putting pressure on the leader, the young Canadian did exactly what was needed of him to score points to draw him closer to the championship leader. A slight off on lap five would see a gap open to the leader but Ostella was able to hold the rest of his competitors at bay until the driver change where Dion von Moltke would take over. After a fierce battle that saw some aggressive racing and close battles, the M1 GT Racing Audi would finish Saturday’s event in the eighth position. 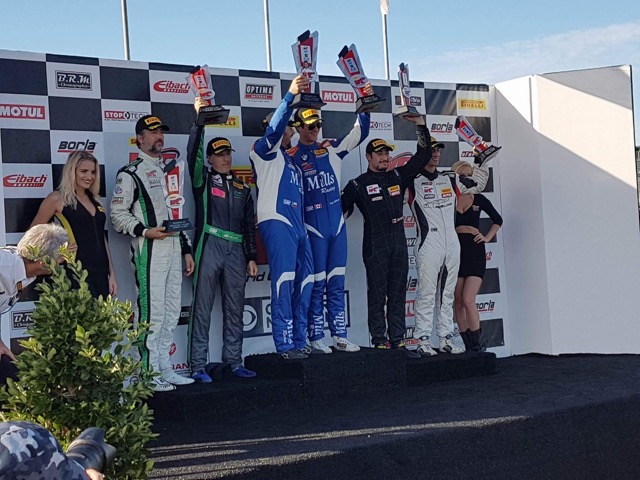 With Sunday’s starting grid based on the fastest times from Saturday’s race, the M1 GT Racing Audi R8 would start inside row three in the fifth position as von Moltke, according to series rules, would start the race and hand the controls over to Ostella just around the halfway mark. With the Canadian driver hopping behind the wheel in the seventh position, he quickly began to move his way forward.

Making on track passes, taking advantage of competitor’s misfortunes and turning faster laps than the eventual race winner, Ostella moved into the top-five. While in fourth and making a bid for the final step on the podium, contact was made, damaging the front of the Audi R8. With the damage hindering the forward progress sufficiently, Ostella would need to decrease his lap times to save the equipment. Limping through the remaining eight minutes, the M1 GT Racing Audi would cross the stripe in the third position, giving Ostella enough points for the second position in the PWC SprintX Sportsman Driver Championship and solidifying the second position in the team championship for M1 GT Racing.