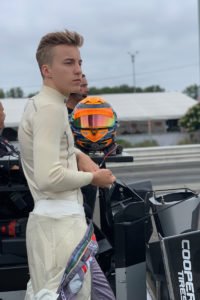 With the start of the 2020 race season still over four months away, HMD Motorsports continues to make strides on their growing program. With the move of the team to the Indianapolis, Indiana area and the hiring of an experienced staff, the team is happy to announce that David Malukas will be back for his sophomore Indy Lights Presented by Cooper Tires championship season.

“We are very happy to have David back in 2020,” explained Team Manager John Cummiskey. “2019 was a great learning year for David, and he was able to gather podium results in Austin as well as on the oval in St. Louis. Returning for 2020 with renewed focus, energy and experience by his side, David will be a contender for the series title as we head towards Laguna Seca next September.”

Only 18 years of age, Malukas has been on a meteoric rise through the Road to Indy. Competing in only a handful of Cooper Tires USF2000 Championship events where he showed his speed right away, the Chicago, Illinois resident became a victor in the Indy Pro 2000 Championship in 2018 with a dominating event weekend at Road America and proved that was no fluke with a win in Portland. 2019 saw another step up in series to Indy Lights where he was an instant top-five runner and managed to find his way to the podium on two occasions.

“To say I was happy with my 2019 season would be a lie,” added David Malukas. “I want to win, but also know that I was against a steep learning curve. I took each and every session, each and every lap and the highs and the lows of the season all in stride and gained experience along the way. The team made some big administrative changes behind the scenes and at least one of the HMD drivers were on the podium in the final five event weekends of the season so I am confident that 2020 will bring success.”

Malukas is set to take on the upcoming series test at the Sebring International Raceway December 11th and 12th in his final test before the holiday season.

In other news, HMD Motorsports has added to the Indy Lights fleet expanding the quantity of cars from two to three, opening the path for another driver to compete in the upper tier of the Road to Indy. Currently, all HMD Motorsports USF2000 and Indy Pro 2000 equipment is for sale.