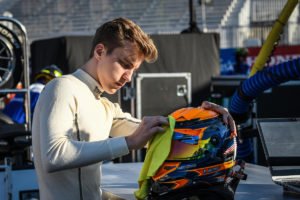 Looking to get his season back on track, BN Racing driver David Malukas is seeking redemption at the Mid-Ohio Sports Car Course this weekend, July 26-28. Last season, while competing in Indy Pro 2000 Presented by Cooper Tires (formerly known as Pro Mazda) Malukas showed great speed before an engine failure took him out of the running while battling for a podium result. Now, competing in his rookie season of Indy Lights Presented by Cooper Tires, Malukas is hoping he can produce another successful weekend.

“My season started off pretty strong with a few third and fourth place finishes, but luck does not seem to be on my side lately,” Malukas said. “I’m excited to be going back to Mid-Ohio and to a track where I know I can produce solid results. Last year I came in second here in one of the races, so hopefully I can place myself back on the podium.”

In a recent private test at Mid-Ohio, Malukas was able to familiarize himself with the track again and take the time to refocus and prepare for the upcoming weekend.

“With only one official practice session this weekend, I’m thankful that I had the opportunity to get some extra practice sessions in, without the added pressure of getting ready for a race,” Malukas continued. “Track time can be difficult to come by, so any opportunity I have to get in a car and put some laps down is a great advantage.”

The weekend will officially begin for Malukas on Friday morning with one 45-minute practice session followed by qualifying later that afternoon. Saturday will pick up with the second qualifying session of the weekend followed by race one at 1:20pm. The weekend will culminate with a final race on Sunday afternoon at 12:45pm preceding the NTT IndyCar Series race.