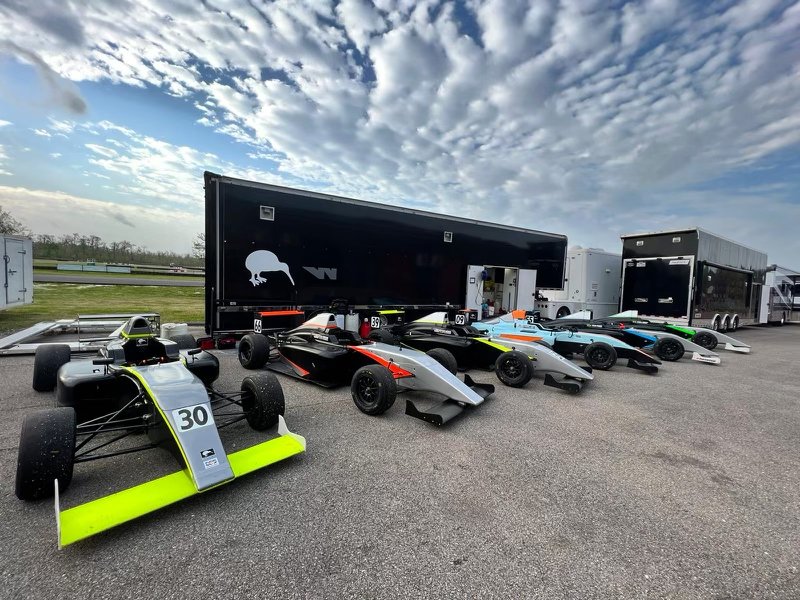 The team came out of the gate strong running at the top of the unofficial time charts in the two-day series test at NOLA Motorsports Park last week. Familiarizing themselves with the course’s twists and turns, ten Crosslink Kiwi Motorsport drivers will be vying for their chance to stand atop the podium.

The roster includes many familiar faces, with a few new additions. Returning with Crosslink Kiwi Motorsport in the F4 series this year are Bryson Morris, Gabriel Fonseca, and Ryan Shehan, among the three, bringing home two top-ten results in the championship standings in 2021. Rookies to keep an eye on joining Crosslink Kiwi Motorsport on the F4 side of their program include Lucas Fecury, Maddie Aust, and Lewis Hodgson.

Cooper Becklin, who competed with Crosslink Kiwi Motorsport in 2021, is looking to score big. After two events in FR last year that saw Becklin earn five top-ten results, he has his eyes set race wins, podium results and the series championship in 2022. Joining him in the program and in the race to the trophy are 2021 FR Americas drivers Dylan Tavella and Ryan Yardly alongside team newcomer Kevin Janzen, who looks to take advantage of the Crosslink Kiwi Motorsport knowledge and driver development program.

“We have a great group of drivers and are really looking forward to a good season of racing,” explained Teena Larsen. “Our Crosslink Kiwi Motorsport partnership continues to flourish and that will be a big benefactor for us as the season rolls on.”

“We have divided our tasks and all focus on what we are good at,” explained Gill Kaszuba. “Last week’s test was a perfect example on how we can achieve results while working towards one common goal.”