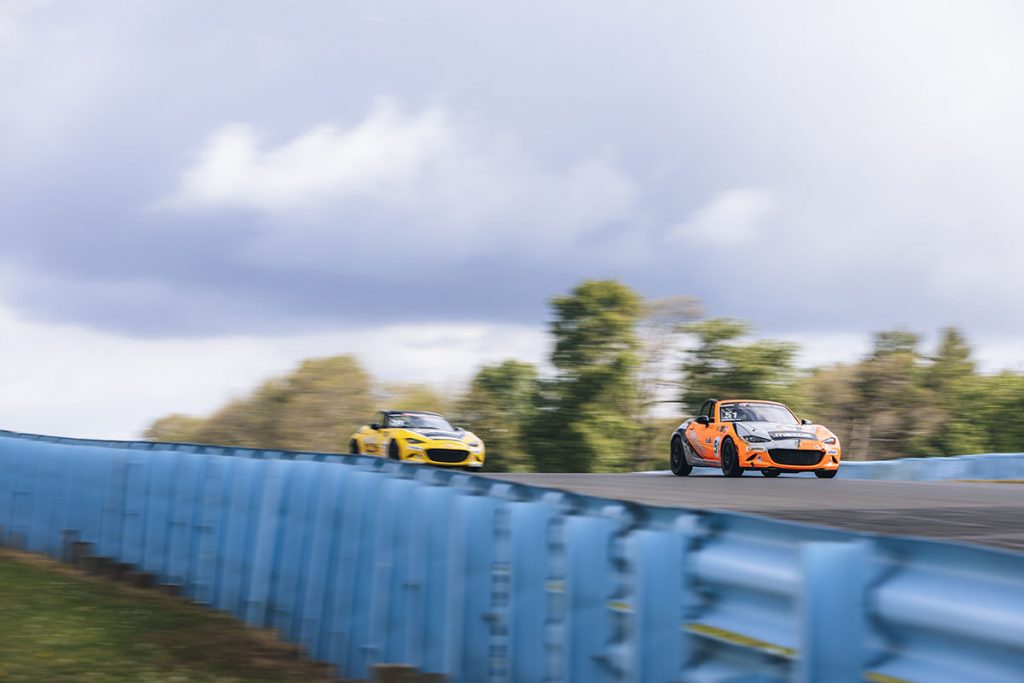 It was a winning weekend for Copeland Motorsports as perennial front runner Tyler Gonzalez earned the round seven victory in the Idemitsu Mazda MX-5 Cup Presented by BF Goodrich at the Watkins Glen International Raceway. Copeland Motorsports’ Jameson Riley and Max Opalski earned four top-15 results between them to go alongside the Gonzalez victory as the team now sets sights on Road America in Elkhart Lake, Wisconsin. 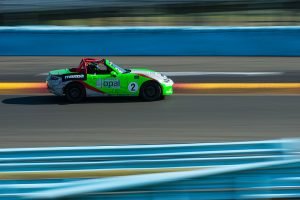 It was a qualifying session to forget for the Copeland Motorsports trio as Opalski, Gonzalez and Riley were well down the running order in 16th, 17th, and 19th. Unhappy with their performances and some time before the first green flag of the weekend, the team went to work to prep their machines for battle.

“Our results are not representative of our true speed,” expressed Dean Copeland. “Results will be difficult starting deep in the field but as a team we never give up until the final checkered flag.”

Tyler Gonzalez would make his team boss eat his words, but he was happy to do so once wheel-to-wheel racing commenced. Starting from 17th, Gonzalez drove through the field and by the 15-minute mark was in third. Battling hard at the front of the field in a caution filled race, the Copeland Motorsports driver took the lead on several occasions before losing it a lap later. Remaining patient as the laps ticked down, Gonzalez made his move for the lead with just under five minutes remaining. A late race caution halted the field in place and Gonzalez drove to the win, his second of the season, behind the pace car. Behind him, Max Opalski and Jameson Riley both made forward progress with Opalski getting the edge on his teammate and securing the 13th position on track with Riley in 14th.

Copeland added, “That is what we like to see. A huge congrats to Tyler and the team on the win but also to Max and Jameson for staying out of trouble in a chaotic race. Three drivers in the top-15 is all we could ask for after the disappointment in qualifying this morning.”

Looking to repeat the winning performance and better the performances of others in race two on Sunday, disaster would strike early for Gonzalez. Issued a drive through penalty for avoidable contact on lap three, the round seven victor was forced to retire from the race. Jameson Riley would assume the lead on the results sheets for Copeland Motorsports as he turned his 14th place starting spot into a tenth-place finish when the final checkered flag flew. Like Riley, Opalski started his second wheel-to-wheel action of the weekend in 15th and secured a 14th place finish in the end. With five top-15 finishes on the weekend, Copeland Motorsports will shift their focus to next weekend at Road America.

Copeland added, “It is a quick turnaround for us as we now head to the Midwest and to a track that we have had much success at in the past, Road America. While Tyler Gonzalez will be absent from the event, we will aim for podium results for Max and Jameson in Elkhart Lake.”

There is no time off for Copeland Motorsport as the team will travel to Road America in Elkhart Lake, Wisconsin for the next two rounds of the Idemitsu Mazda MX-5 Cup Presented by BFGoodrich. Max Opalski and Jameson Riley will be back on track while two-time race winner Tyler Gonzalez will be forced to miss the event due to a conflict.

Copeland added, “Unfortunately, Tyler will travel to Canada for the Michelin Pilot Challenge race as he is higher in the points in that championship. We look forward to welcoming him back at the next event at VIR.”

Stay tuned to the Copeland Motorsports social media pages for news, information, photos, and results from the upcoming event weekend.