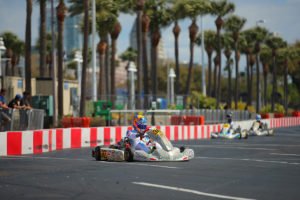 With eight drivers in contention, five of them qualified in the top-ten in their respective classes as both Jorge Ortiz and Diego Ardiles led the way with fifth place qualifying positions. Competing in the 100cc Junior class, Ortiz’s best result came in heat two with a third place finish but Championship Sunday was not kind to the youngster. Ardiles was one of three drivers to do battle in the Mini ROK class and progressed through the three heat race format and prefinal having never run outside the top-seven. Finishing fifth in the main event, Diego will look to springboard this finish into more results as the year rolls on.

Christian Quijano improved from his eighth-place qualifying effort to move forward in each and every heat but one. Finishing third, fifth and 19th, Quijano secured an inside row two starting position courtesy of his third-place result in the prefinal race and transformed that into a second-place podium result at the end of Championship Sunday. Challenge of the Americas race winner Christian Cameron was consistently in the top-ten as he continues to improve with each passing race weekend against tougher competition. Qualifying seventh and finishing tenth in the prefinal, on track contact relegated Christian down the running order until he rebounded to finish 11th.

Utilizing a Supertune engine and receiving support from the team, Parker Delong was able to challenge at the front of the Mini ROK field. Qualifying third, Delong had a rough heat one where he finished 11th but rebounded for second and first place results in heats two and three. Classified fourth in the prefinal after a post-race penalty, Delong returned to the podium with a P3 effort during Sunday’s main event. 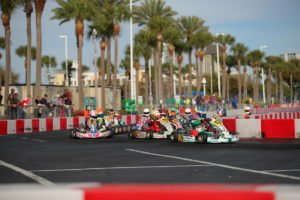 Cole Morgan had a spirited drive in ROK Senior as he was another Team Supertune driver that progressed throughout the weekend. Qualifying 12th and finishing tenth and sixth in two of his three heat races, Morgan went on to run ninth in the prefinal. Pushing hard in the main event, the Californian secured a fourth-place result, narrowly missing his first career Florida Winter Tour podium.

The Supertune ROK Junior duo of Anderson Leonard and Carson Morgan did not have the best results in round three. Both drivers showed pace and had runs inside the top-ten in a handful of their heat races, but contact hindered any chances of strong finishes.

“The competition at the Florida Winter Tour continues to get stronger, and we have to work hard to elevate our game. Congrats to Christian for his first career Florida Winter Tour podium,” explained Ben Cruttenden. “This is one of our busiest stretches of the season as we pack up here and head to NOLA Motorsports Park.”

For more information on Supertune, race team opportunities in 2020, OTK product sales, or engine and dyno services, please contact Ben Cruttenden at 317.900.3141 or via email to Ben@Supertune.us.