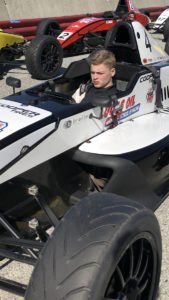 Making his debut into the formula car world at the WeatherTech Raceway Laguna Seca, American driver Colin Queen is set to begin his climb up the motorsports ladder. Taking on the Lucas Oil Racing School Formula Winter Series this past weekend, the multi-time karting champion stole the show claiming one pole position, two fast lap honors, one race win, and two podium results.

“Laguna Seca is a track I have only seen on TV,” expressed Colin Queen. “Such an awesome experience. I felt that I adapted well and was up to speed very quickly. I was absolutely confident behind the wheel with both my progress, racecraft as well as utilizing the draft. The Corkscrew has to be one of the top motorsports corners in the world and to compete on it was truly incredible.”

In a lottery for cars where Colin selected car #4, the first race was scheduled for last Thursday afternoon. With a cold front moving through the area, wind and cooler than normal temperatures greeted the competitors, but it did not faze Colin. Setting the pace in practice, Queen went on to carry that speed into qualifying claiming the pole position with a 1:41.045 lap. In a series that is designed to provide close racing, Queen dominated the first wheel-to-wheel action of the weekend. Once again scoring the fastest lap of the session, the young Californian opened his lead to more than ten seconds and never looked back. 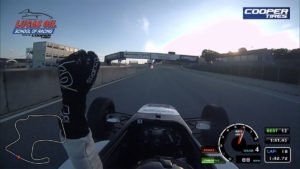 With completely different weather conditions facing the drivers for race two, sun and warmth had entered the area as the cold and wind had moved out. Continuing where he left off the day prior, Colin claimed the fastest lap in practice even though he was forced to end the session early due to an overheating car. Race two saw another front-row starting spot as a second-place effort in qualifying awarded Colin the outside pole position. Battling for the lead for the entire race including multiple changes for the top position, Queen came up 0.8 in arrears of the eventual race winner en route to another fastest race lap. 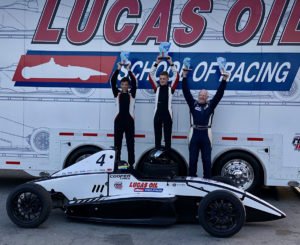 Queen added, “It was a great weekend with two podiums. The Lucas Oil Racing School Formula Winter Series instructors were top notch and the series was well run and a lot of fun. I learned a lot and know that I have a big learning curve ahead but am ready to give it 110%. Can’t wait for my next on-track action.”