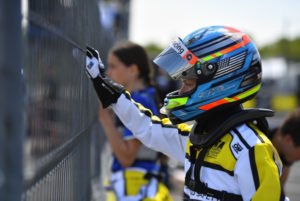 Representing the United States of America at the CIK/FIA Academy Trophy, American driver Colin Queen traveled to Salbris, France this past weekend for the opening round of the program. With top-ten speed throughout the week, Queen completed his first European main event of the season all while gaining experience working with a new mechanic and new tire brand on a technical and challenging facility.

After several practice sessions leading up to the weekend, Queen’s plan in qualifying was to utilize the draft to his advantage as he left the grid with the eventual pole position winner. With drivers looking for space through the racing circuit and time winding down, Queen had no choice but to try and put a lap in as he was held back at the tail of a long line of karts. When the checkered flag flew, the Californian was classified in the eighth position and would start his heat races from the fourth row.

“Qualifying was not what I had planned,” expressed Queen. “It is much different over here in Europe than it is in America and the drivers are really good on their out laps and only need a lap or two to lay down a quick time. Also, this is my first time using the Le Cont Tires. They are much different than the Vega brand that we have been using in the WSK program so it took some time to get used to.”

With temperatures unseasonably hot, Queen looked to advance forward throughout the three heat races and set up an attacking start position for the main event. With a few minor setbacks, the American was able to complete every lap on the weekend, but had to overcome some challenges.

“In the first heat, everything was going well and I was running in the top-ten,” explained Queen. “I had a cooling issue as the flap on my radiator kept closing and the engine would overheat. I had to drive a lot of the race holding the flap open but my arm was in the way and obstructed airflow causing the engine to continue to overheat. As the engine temperature rose, I would lose a little speed and fall back to finish 11th.”

Heat two saw Queen again run in the top-ten before claiming the checkered flag in the tenth position. A post race bumper penalty for contact relegated him down the classification order, hurting his chances at a solid starting spot in the main event. 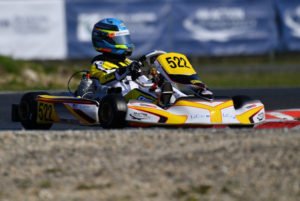 Queen continued, “On one of the attempted starts, several drivers checked up and I was hit from behind and forced into the competitor in front of me. Though it was not a loss of position or deliberate, those are the rules and I accepted the penalty.”

“My heat race finishes classified me in the 18th position but due to the penalty in heat two, I was forced to start the final in 23rd,” stated the American. “When you are mid-pack like that, anything can happen and it did. At the start, several competitors were involved in an incident in turn three and the track was blocked. Taking evasive action to avoid a collision, I lost track position and time to the leaders. Never giving up, I pushed hard to advance forward as far as I could and completed my first European final of 2018.”

Continuing his recap of the weekend, Queen added, “Sologne Karting is one of the most technical tracks that I have ever raced at but also a lot of fun. A huge thank you to my mechanic Kacper. It was our first event together and he is very knowledgeable on the engine, chassis and coaching side of my program.”