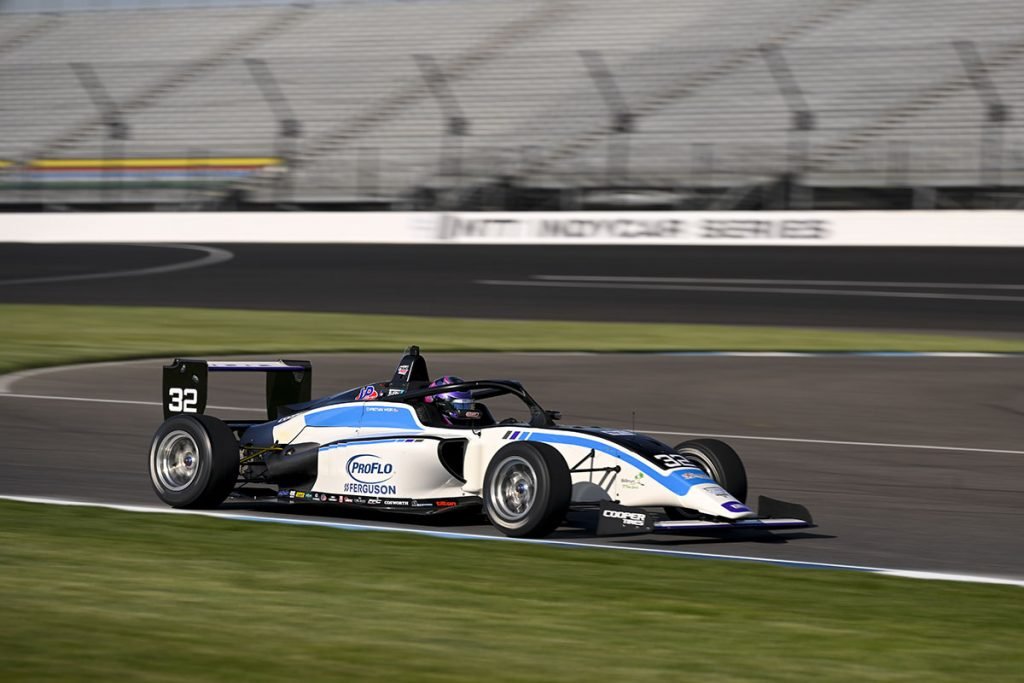 Getting acclimatized to the Indianapolis Motor Speedway, Weir started off his weekend with two series test sessions on Thursday followed by the lone official practice session as he and his team prepared for their first triple header race weekend of the season.

“We had a great test day leading into the weekend and things were looking good for a positive weekend,” explained Weir. “Qualifying was not what we had wanted, but we will look to drive forward in the races.”

Despite showing top-five pace in testing, a red flag in the session left Weir further down the running order than expected as he wasn’t unable to get his fastest qualifying lap in before the session ended. By late morning on Friday, it was race time. With contact between other cars early causing a caution on the first lap of the race, drivers were bunched up again for a restart and Weir took total advantage of the scenario. Working his way through the field and showing his true speed once green flag racing resumed, the Turn 3 Motorsport driver was able to advance ten positions and earn himself an impressive fourth place finish.

Saturday and Sunday weren’t kind to Weir as contact from behind caused him to retire race two early and a tough race three left him outside the top-ten in the twelfth position. With the first race of the weekend concluding with his best result at the Indianapolis Motor Speedway, Weir is looking forward to his next race in just ten short days.

“Our weekend started off great with speed throughout testing and a solid drive in race one to drive to a P4 result,” explained Weir. “I was able to make some big passes and was feeling confident for races two and three. The second race really threw us off for the rest of the weekend. It was disappointing but I can’t dwell on it too long. Our next race is right around the corner, and it will be our only oval event of the year. We have already completed a test day at Lucas Oil Indianapolis Raceway Park, and we are ready to turn it around there in two weeks.”

Weir and the team are aiming to get back on the podium at their next race in two weeks at Lucas Oil Indianapolis Raceway Park in Brownsburg, Indiana for the Carb Night Classic. He will be on track Thursday, May 26th and Friday, May 27th. Tickets are available at https://raceirp.com/schedule/. Follow along on his social media pages on Facebook, Instagram, and Twitter for schedules updates, and results.

Christian Weir would like to thank all his 2022 partners for their continued support. A huge shoutout to Ferguson, ProFlow, eComfort and Motorcars of Palm Beach. A huge thank you to both Turn 3 Motorsport for all the help and support.