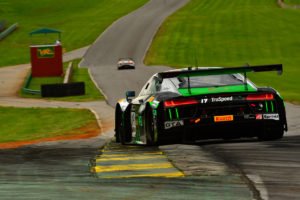 “Practice one was quite productive on Friday and I think we found the sweet spot in the car,” explained Chase on Saturday morning. “With a new set of Pirelli tires, I think we will have a really balanced setup to race with over the course of the weekend.”

Qualifying ninth overall, but second in the SprintX Pro/Am division, it looked as if the Audi R8 GT3 LMS had a shot at the pole before a flat tire ended their session early. Taking the green flag Saturday afternoon, the hour-long race was slowed by a yellow flag early for a scary on track incident by a fellow competitor. Following the pace car for several circuits, Chase was anxious to get going and show the speed of his TruSpeed AutoSport Audi.

“Sometime during the opening few laps I was hit and damaged a piece of the front bodywork affecting the handling,” added Chase. “The Ferrari was running in second place. I was able to run with him, but he had incredible straight-line speed. I kept trying to put pressure on him and fill his mirrors. He dropped a tire in one braking zone and that allowed me to get by before the pit stop and hand the car off to Ryan for the second half of the race.”

With the Audi R8 GT3 LMS suited for VIR and similar type facilities, Co-Driver Ryan Dalziel took the wheel and brought it home to the finish. Turning some of his quickest laps of the weekend, the Florida resident was able to maintain the second position in class but advanced forward to the sixth position overall before the checkered flag, their best result of the season to date.

“I am super happy with our second place finish today,” stated Dalziel. “Parker had a great stint, handed the car over to me and I maintained our position on track. It’s all we had. We will make it a little better overnight and come back stronger tomorrow.” 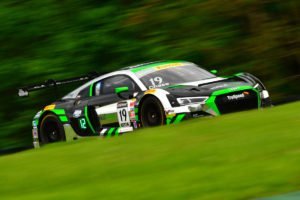 During race two on Sunday, it looked as if Chase and Dalziel were in position to claim a double weekend podium as Ryan would start the hour-long race and hand the controls to Parker just after the half way point.

“Ryan had a great stint and we were able to gain a position during our pit sequence,” added Chase. “Unfortunately, I made a mistake in the final minutes of the race that took us out of another podium. We had the car to be there and I can’t thank the TruSpeed AutoSport guys enough for the effort and hard work throughout the weekend. The car was on point all weekend and is a positive sign as we head to Canada.”

Closing the weekend with a fourth place finish and tenth overall, Parker Chase will take a few weeks off from the track before traveling north of the border to Canada. Competing at the Canadian Tire Motorsports Park in Bowmanville, Ontario on the May 18-20 weekend, Chase has goals to continue to add to his 2018 podium runs and improve his position in the championship chase.