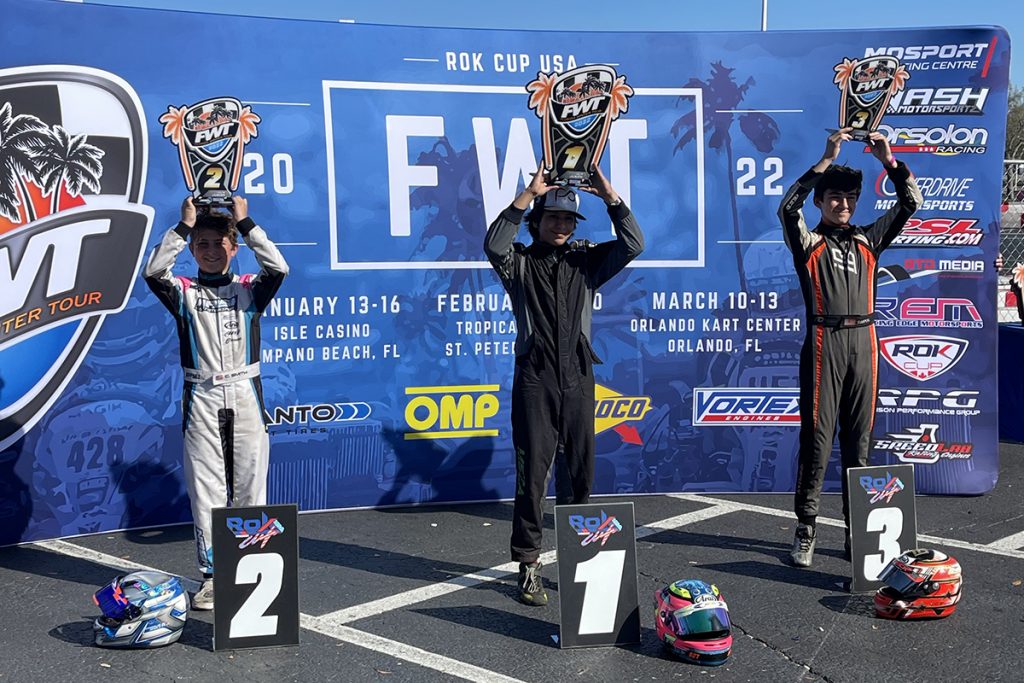 It was another podium winning weekend for Charlie Smith and the Smith Factory Racing / Nash Motorsportz driver at the second round of the ROK Cup Promotions Florida Winter Tour this past weekend. Taking on the barrier lined temporary circuit at the Tropicana Field in St. Petersburg, Florida, Smith competed in both the VLR Junior and ROK Junior classes as he doubled up on both track time and podium chances.

“It was great to race in two classes and get some additional track time,” expressed Smith. “I think on a temp track, the grip is always changing so I was able to learn even more with double the amount of track time. In the end, it definitely benefited our program.”

Qualifying second in the VLR Junior class, Smith had three average heat races finishes in sixth, eighth and fourth. While consistently towards the front of the field and with three results inside the top-eight, the Nash Motorsportz driver would line up on the inside of row two for the ever important prefinal on Saturday afternoon. With results from the prefinal setting the grid for Sunday morning’s main event, Smith was consistent in his approach and crossed the stripe with a P3 result.

Returning to the track on Sunday for a short warmup session before his final, Smith was able to take advantage of the inside lane starting position and advanced forward in the opening complex of corners. Unable to keep pace with the eventual race winner, Smith was able to open a gap on the rest of his rivals and cruise to a second place result, his second podium finish in as many races at the Florida Winter Tour.

In the 32- kart strong ROK Junior category, Smith was once again at the pointy end of the field. Qualifying in the sixth position and having three heat race finishes in the top-ten (tenth, fifth and tenth), it was an outside row three and sixth place starting position for the prefinal. While the goal was to move forward, some aggressive racing and wheel-to-wheel contact pushed Smith outside the top-ten and to a 13th place result. Looking to move his way back forward on Sunday, the close hard racing continued, and Smith finished his weekend with a 15th place finish.

Smith added, “Our focus was on the VLR Junior category and now I have two podiums in two races heading into the final round. With a shot at the overall series title, I am looking forward to the Orlando event.”